Mumbai, India -- Nearly 15,000 followers from the interiors of Maharashtra and across India thronged to Mumbai, converging at Shivaji Park, to mark the death anniversary of Dr Babasaheb Ambedkar on Thursday. 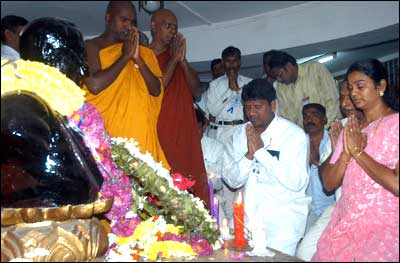 Dr Ambedkar, known as the Father of the Constitution, was a jurist, scholar, political leader and a Buddhist revivalist. He spent his life fighting untouchability and the Indian caste system.

He is also credited for having sparked off the Dalit Buddhist movement. Overcoming numerous social and financial obstacles, Ambedkar became one of the first 'untouchables' to obtain a college education.