NEW DELHI, India -- Tibetan spiritual leader the Dalai Lama was resting in his home-in-exile Tuesday after being treated for a pinched nerve in hospital, his spokesman said. 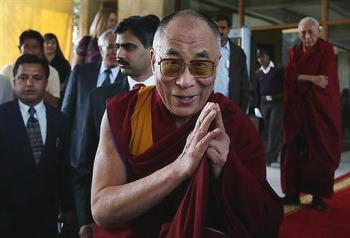 << The Dalai Lama after being released from a New Delhi hospital

"He is in residence, wearing a collar which has been prescribed," Tenzin Taklha told AFP.

The 73-year-old Buddhist monk had been rushed by air to New Delhi's Apollo hospital on Monday from his home in the northern hill town of Dharamshala after he complained of discomfort.

He was released the same day after being prescribed medication and spent the night in New Delhi recovering.

"He will resume his schedule tomorrow as audiences are lined up for religious discourses," said Taklha.

The Dalai Lama was admitted to a New Delhi hospital in October last year for keyhole surgery to remove stones from his gallbladder.

A similar health-related episode last August forced him to cancel regular engagements and be admitted to a hospital in Mumbai.

The Dalai Lama has lived in exile in Dharamshala since he fled Tibet in 1959 following a failed uprising against Chinese rule.