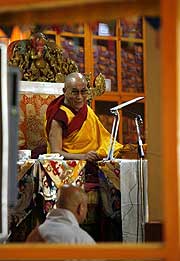 << His Holiness the Dalai Lama laughs during an opening session of his three-day teachings for Korean Buddhists in Dharamsala, India, on Tuesday, September 15, 2009. Over 4000 devotees attended his first day teachings. (Photo: Abhishek Madhukar)

Over 4000 devotees, including more than 1400 foreigners from 55 different countries, have registered for the teachings.

The other attendees include some 3000 Tibetans, including Buddhist monks and nuns. Besides, several hundred non-registered followers are also attending the teachings, according to organisers.

His Holiness the Dalai Lama began his first day teachings speaking on the Four Noble Truths, elaborating on the fundamental principles of Buddhism.

The teachings are being translated in Korean. Simultaneous translations in English, Chinese and Japanese are also made available on FM radio.