Colombo, Sri Lanka -- Sri Lanka is to investigate the role of the media in the death of a Buddhist monk on Saturday, the day after he set fire to himself. 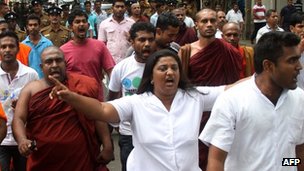 Officials say journalists who filmed Bowatte Indarathana's self-immolation could have tried to have him rescued.

The Media Ministry Secretary, Charitha Herath, said the monk had told at least one TV journalist of his plan.

Meanwhile, hardline Buddhist nationalists are hailing the dead monk as a hero for his act.

Mr Herath said any reporter who knew in advance of the monk's plans should have contacted the police.

"My issue is that if you have already [been] informed by somebody that he is going to commit suicide, you are supposed to at least inform others to get rid of that disaster," he said.

Venerable Indarathana was protesting against the slaughter of cattle and the alleged conversion of Buddhists by Sri Lanka's minority faiths.

He set himself on fire outside the holiest Buddhist shrine in the country - the Temple of the Tooth in the central city of Kandy. He died in intensive care in the capital Colombo the following day.

The monk - believed to be aged 30 - belonged to a Buddhist revivalist group which has been campaigning against the Muslim halal method of slaughtering animals.

The government condemned media outlets showing video of the incident.

The BBC's correspondent in Sri Lanka, Charles Haviland, says some viewers have criticised the extensive coverage the suicide

However, Sinhalese ultra-nationalist ministers in the government have praised the incident as an act of self-sacrifice for the good of the country, he adds.

Dozens of monks from the same group, Voice of Sinhala, and their supporters, staged a demonstration in Colombo on Sunday after the authorities rejected their demand for the monk to be given a state funeral.

Self-immolation by Buddhist monks in Sri Lanka is exceptionally rare, although many Tibetan monks have recently committed suicide in this way for political reasons.