Fifty years of service to the Sasana

Colombo, Sri Lanka -- The response to weekly Dhamma sermons at the students’ hostel in what was then known as 'Olcott Lodge' in Barnes Place became a source of inspiration for two monks and a devout Buddhist layman to plan the setting up of an organization to serve the Sasana. It was just after the Buddha Jayanthi celebrations to mark the 2500th anniversary of the passing away of Gautama the Buddha. 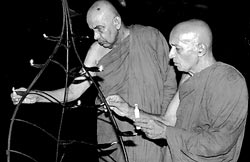 It all began with an idea which was uppermost in the mind of the Most Venerable Madihe Pannaseeha Maha Nayaka Thera before he was elevated to the position of Maha Nayaka. He saw the need to provide an institutional training for young monks. When he visited the headquarters of the Ramakrishna Mission in India, he was impressed with the systematic and disciplined manner in which training was provided. He returned convinced of the necessity for a training institute for the monks. He discussed it with his 'guru', the Most Venerable Pelene Sri Vajirajnana Maha Nayake Thera who endorsed the idea saying that he had wanted the same but was too sick to undertake such a mammoth task.

Madihe Nayaka Thera discussed the project with his brother monk, Ampitiye Sri Rahula Thera and Senator D.L.F. Pedris. 'Olcott Lodge' belonged to Senator Pedris. They agreed and a meeting was convened to inaugurate the organisation. Around 35 people participated. A constitution was adopted and a 24-member committee was appointed. With Madihe Maha Nayaka Thera and Ampitiye Rahula Thera as patrons, the society appointed Senator Pedris as President, D.C.W. Kannangara as Secretary, M.W. Fernando, Assistant Secretary and Norton E. de Silva, Treasurer. Thus was formed the 'Sasana Sevaka Society' fifty years ago with four key objectives in mind. The setting up of a Bhikkhu training centre, the study and propagation of Buddhism, training the laity to lead a Buddhist way of life, and to mould Sri Lanka towards a Dharmadvipa were the four objectives.

Looking back at the fifty years, the society under the guidance of Madihe Maha Nayaka Thera has recorded immense progress in the achievement of the objectives. The Bhikkhu Training Centre at Maharagama was begun on leased premises on April 21, 1958 in less than a year after the Society was formed. It was aptly named the Sri Vajirajnana Dharmayatanaya in memory of the great teacher in 1962. In charge of the administration was Ampitiye Rahula Thera who soon became the 'Loku Hamuduruwo' to the pupil monks. Having donned the robes for 71 years, the Thera, now in his 93rd year, leads a quiet life at the Dharmayatanaya.

To build up a generation of monks, a start was made on June 5, 1960 with the ordination of three novice monks. One of them is Venerable Maharagama Dhammasiri Nayaka Thera, presently the director of the Dharmayatanaya and the chief incumbent of the Washington Buddhist Vihara. He is the most senior pupil of Madihe Maha Nayaka Thera. The years that followed saw a progressive increase in the number of ordinations.

Within four years, the Society collected sufficient funds to buy a six acre block of land where the present complex comprising the residential quarters for monks, the 'seema malaka', the Budu-ge, the chaitya, two spacious halls for the laity to occupy during Poya day programmes and the Dhamma school building are housed.

'Training the trainers' was a concept initiated by Madihe Maha Nayaka Thera who arranged to give a practical training to teachers teaching the Dhamma. He guided the Sasana Sevaka Society to undertake social service projects giving priority to the alleviation of poverty and providing houses to the homeless. He also took the initiative in training monks to undertake missionary work abroad. Starting with the Washington Buddhist Vihara, the Society has established temples in Los Angeles and Melbourne.

The Sunday Dhamma School is a model for such schools. On roll are over 7,000 students. The number of staff members is around 250. The Poya day 'sil' programme is being conducted with separate activities planned to cater to the children, youth and adults.
The International Buddhist Research and Information Centre established at the Narada Centre (named after Venerable Narada whose missionary work throughout the world gave an impetus to Buddhism) off Bauddhaloka Mawatha is a boon to Buddhists the world over who are able to discuss matters relating to Buddhism through the internet and e-mail. The World Buddhist Directory released to coincide with the General Assembly of the World Fellowship of Buddhists held in Sri Lanka in 1984 was a valuable source for the exchange of information.