COLOMBO, Sri Lanka -- President Mahinda Rajapaksa asserted that Rs. 1264 million (US$ 37 mil) had been allocated for the religious Affairs Ministry which is under his purview, to nurture the nation’s spiritual development simultaneously with economic development. 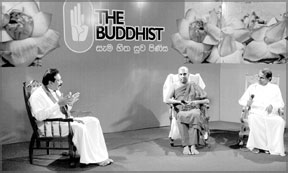 President Rajapaksa made this assertion when he addressed the launching ceremony of the world-wide, satellite-based, Buddhist TV broadcast channel from Sri Lanka last Friday, at the Sambodhi Viharaya in Colombo.

The satellite TV channel located at the Sambodhi Viharaya in Colombo, and operated by the Dialog Company will broadcast programmes to Sri Lanka and the international community, including a host of countries such as India, Nepal, Pakistan, Bangladesh, China and Thailand among others.

The transmissions are expected to be of tremendous value, inspiration and a tower of strength to the Buddhist devotees worldwde.

The President was of the view that a country’s wholesome development was two-fold, incorporating both economic and spiritual values, and therefore any investment geared for religious affairs, was in effect a direct investment for the country’s well-being as a whole.

Recollecting the 2550 long years of the Buddhist heritage in Sri Lanka, he pointed out that they carried the onus of protecting and nurturing Buddhism, to enable them to gift it to the future generations.

“We should be fully committed to this end as a bounden duty of us all”, the President said.

The President further said that due to a lack of spiritual and moral values, the country has created a society which is deficient of a proper understanding of one’s country and its future. The launching of the satellite TV service would proclaim to the world and promote the cause of Buddhism, the country and its heritage.

The Mahanayake of the Asgiriya Chapter the Most Ven. Udugama Sri Buddharakkitha thera making a special address at the launchng ceremony stated that his blessings and the blessings of the Maha Sangha were with President Rajapaksa, for his development programmes already under way, giving full protection to Buddhism.

“We fully endorse and wish to offer our fullest cooperation consistently in the development processes undertaken by President Rajapaksa, the thera said.

However, the Mahanayaka thera pointed out the importance of all patriotic leaders working together in harmony, instead of criticising one another and eventually heading for destruction.

Chief Justice Sarath N. Silva, Defence Secretary Gotabhaya Rajapaksa, the three Service Chiefs, the IGP, the Envoys of Burma, Thailand and China and other distinguished guests participated at the ceremony.