Colombo, Sri Lanka -- Sri Lanka’s foremost Buddhist monk, the Head of the Malwatte Chapter of the Siamese Sect, regretted the recent statement made by Ranil Wickremesinghe, leader of the United National Party, calling Buddhist monks ‘a corrupt company or “Dussila Samagama” and said no service could be expected out of such leaders to the country, the religion and the Buddhist monks in the future. 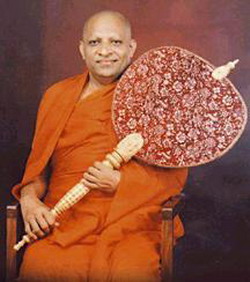 “Some leaders who do not know the value of Buddhist monks over a simple matter, publicly call Buddhist monks a “Dussila Samagama” and I regret such words being used against the Buddhist monks,” said the most Venerable Thibbotuwawe Sri Sumangala, head of the Malwatte Chapter of the Siyam Nikaya in an obvious reference to Ranil Wickremesinghe.

The statement was broadcast by the state owned Independent Television Network.

The controversy started following the UNP leader making public statements devaluing the victory of the country’s armed forces capturing the last bastion of the Liberation Tigers of Tamil Eelam (LTTE) in the Eastern Province at Thoppigala.

The statement was condemned by the Venerable Ellawela Medhananda, the leader of the Jathika Hela Urumaya , a political party mostly represented by Buddhist monks.

In retaliation, the United National Party (UNP) leader Ranil Wickremesinghe called those Buddhist monks a “corrupt company” that became a hornet’s nest in form of demonstrations, protest meetings and public statements all over the country.

He is alleged to have said that those monks need Mercedes Benz to travel along the noble eight fold path, ridiculing their alleged life style.

The JHU calling it ‘libelous’ said it would sue the UNP leader for his uttering in a court of law.

The statement issued by the Head of the Malwatte chapter is considered very politically damaging in a majority Buddhist country in which the majority of Buddhist temples and the learning centers called Pirivenas belong to that chapter.

Among the approximately 50,000 Buddhist monks in the country, not only majority of them belong to about the six chapters of the Siamese Sect but even the other sects respect the opinion of the head of the Malwatte chapter.

The most Venerable Thibbotuwawe Sumangala in a further obvious reference to Ranil Wickremesinghe said, “I doubt very much from such leaders any service to the country, the religion or the Buddhist monks could be expected.”

Ranil Wickremesinghe’s statement has already created controversy in his own party and the treasurer of the party, Tilak Karunaratne has already tendered his resignation citing the statement about the bhikkus as one of the reasons for the resignations.