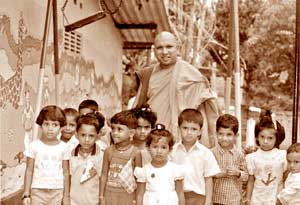 << The founder of the Siduhath Nursery School, Chief Incumbent of the Singapore Buddhist Temple, Ven. Yatamagala Sumanasara Thera with a group of newly registered nursery children.

‘The main aim of this nursery school is to educate small children who belong to low income levels under the guidance and directions of a well trained tutors in both Sinhala and English media.

The Director of the Cancer Hospital Dr. Kanishka Karunarathne was the Chief Guest at the opening ceremony and the Maha Sangha from nearby temples in Makumbura and Homagama chanted Seth Pirith.

Subsequently the registration of the students took place. A lot of small children in low income families from Makumbura, Deepangoda, Malapalla, Puhudelgahawatta registered at the Siduhath nursery school for their early childhood education.

The founder of the Siduhath Nursery School, the Chief Incumbent of Singapore Buddhist temple Ven. Yatamagala Sumanasara Thera’ said, “The main resource of a country is its children. As they are the future leaders it’s very essential to educate them in all possible ways. The main objective of the World Buddhist committee is to educate and enlighten.

The Siduhath Nursery School has opened doors for low income families to educate their children in both Sinhala and English.”

He added that his committee has decided to start more nursery schools in selected places and open a vocational training school.