Colombo, Sri Lanka -- Buddhism is being recognized as the fastest growing religion in Western societies both in terms of new converts and more so in terms of friends of Buddhism, who seek to study and practice various aspects of Buddhism. 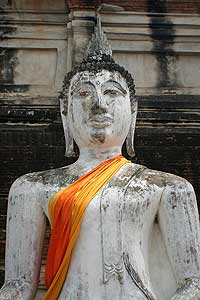 Dr. Ananda Guruge, leading Buddhist Scholar and former Sri Lankan Diplomat made this observation during a public lecture at the All Ceylon Buddhist Congress Hall Colombo on Friday, April 4.

The lecture titled, "Role of the Sri Lankan Leadership in the Protection of Buddhism" was delivered under the auspices of the Buddhist and Pali University, All-Ceylon Buddhist Congress and the Buddhist Times Trust.

Dr. Hema Goonatilake of the Buddhist Times Trust was the Convener.

"Both on account of a series of Diaspora from China, Taiwan, Korea and Vietnam, adherents to Northern Schools of Buddhism are numerically preponderant. Interestingly, the intellectual interactions between these ethnic Buddhists and those devoted to Buddhism in the West have created a new demand for a deep understanding of early Buddhism as preserved in Pali sources in Southern Buddhism.

A similar tendency is evident in the traditionally Northern Buddhist countries also. This demand has been further increased by the popularization of Vipassana Meditation by Mahopasaka S. N. Goenka. What the world needs today is not confined to what is in Pali. The Sinhala works on Buddhism have as much relevance and the translation of Sinhala classics into world languages is also a contribution to Buddhist Studies."

Noting that both Myanmar and Thailand have begun to respond to this demand, he pointed out that opportunities exist for Sri Lankan scholars to initiate cooperative activities with the growing institutions in Southeast Asia such as the World Buddhist University, established by the World Fellowship of Buddhists, and International Association of Buddhist Universities, initiated by Venerable Thepsaphong (now known as Dhammkosajahn).

"I am gratified to note that Dr. Sumanapala Galmangoda is scheduled to lead a team of scholars from Kelaniya University to conduct a panel discussion on Buddhist Ethics in a Conference organized by this Association to be held in Bangkok in September this year. Another opportunity - which is available for Sri Lankans to cooperate in a significant international venture - is to participate in contributing to the Electronic Cultural Atlas Initiative (ECAI) led by Professor Lewis R. Lancaster of University of California Berkeley. Such involvement will also enable our scholars to be trained in using high-tech tools of research, which are increasingly becoming indispensable."

Dr. Guruge recalled that Lanka has many firsts in the history of Buddhism -developing commentaries on the Buddha's teachings in the national language (3rd century BCE), reducing to writing the Buddhist canon and its commentaries (1st century BCE), sending bhikkhunis to China to establish the bhikkhunisasana (5th century), enabling the dissemination of the commentaries to a wider readership through translations into Pali (5th century), unification of Southern and Northern traditions of Buddhism and evolving a form of ecumenical Buddhism (12th century), spreading that form of Buddhism to Southeast Asia along with Pali literature and traditions of Buddhist architecture and art (12th-15th century), being the foremost centre of Buddhist scholarship from the nineteenth century, taking Buddhism back to India, its land of origin (19th-20th century), serving as the focal point from which Buddhist missionaries took Buddhism to all continents in modern times, and restoring the bhikkhunisasana in Southern Buddhism (20th century).

He stressed the need for maintaining this record said that and no efforts should be spared.

"May the Sangha of Sri Lanka rise up to the challenges of the time and may the powers that be, namely and most importantly the educators and scholars take upon themselves the task of maintaining Sri Lanka's leadership in Buddhist Studies. This can easily be a major objective of the preparations for the next major event in the history of Buddhism – the 2600th anniversary of the attainment of Buddhahood in 2011-2012."

He emphasized that any strategy Sri Lanka develops to maintain her leadership in Buddhist activities has to be based on these advantages that the current internationally recognized scholars enjoy. He recommended the following are the actions for the immediate consideration of all concerned:

1. It is my conviction that the atmosphere required for the promotion of Buddhist studies has to be developed by a resurgence of dedication to scholarship in the Sangha. The higher education of the Sangha with due emphasis on original scriptural sources in Pali, Sanskrit and other Canonical languages is indispensable. One is no doubt appalled by the falling standard of Pali learning in the country. It is hardly taught in schools and one cannot be altogether satisfied with the standard of Pali teaching in the Pirivenas.

Sanskrit has gone down even further. Without a very high level of proficiency in these languages, few monastics are in a position to produce the kind of scholarly work that those of a previous generation could. It is the Sangha that had preserved the study of Pali and Sanskrit not only through the Pirivenas but also through schools. Serious attention has to be given to the promotion of these languages if Sri Lanka has to retain its leadership in Buddhist Studies.

2. A critical mass of research scholars should acquire an excellent command of the spoken and written English because the fruits of their labors would never be known outside the Island unless they are presented in impeccable standard of English. At the same time, our scholars should be able to access the research that is being done in the world. Without such access at least through the medium of English, the greatest danger in our institutions of higher education is that students are not introduced to new knowledge.

3. Some at least among them should proceed to gain some degree of proficiency in research languages useful for Buddhist Studies such as Chinese, Tibetan, Korean, Japanese and Vietnamese as well as French, German and Italian.

4. Scholars with ability to speak and write in foreign languages should be given every opportunity (with financial provisions for membership fees, travel and subsidies for publications) to -

2. Contribute well-researched learned articles to recognized peer-reviewed foreign journals and also to have their books published abroad. (Equally important is to get articles and books of high quality in national languages translated into foreign languages. It must be stated here that Sri Lankan scholars do publish annually a substantial number of learned articles in English in Felicitation and Commemorative Volumes, the Sri Lankan Journal of Buddhist Studies and University Journals but their outreach to the world is very limited.. The efforts of Professors Y. Karunadasa, Asanga Tilakaratna and Venerable Kuala Lumpur Dhammajoti in this regard are very creditable. The speedy completion of the Encyclopedia of Buddhism has also to receive the highest priority.)

3. Review in national journals important works by foreign scholars both for the purpose of apprising local scholars and students of the availability of new research findings and also to let the international scholars know that their work is under scrutiny by our scholars;

4. Participate in international seminars and conferences, presenting papers and interacting with worldwide scholars to have an international peer review of research done by them in Sri Lanka;

5. Organize periodically international conferences inviting recognized scholars of the world and conducting them with the highest level of efficiency and effectiveness.