Colombo, Sri Lanka -- Sri Lanka is blessed with several mountain or mountain ranges; Sri Pada Piduruthalagala and the Knuckles Range are just few of them. Some mountains are associated with deities and other supernatural beings hovering above the clouds and these have being the admiration of humans. 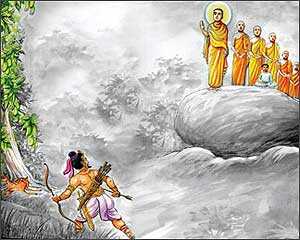 Missaka Pabbata in Mihintale is about 16 kilometres to the east of Anuradhapura which was the capital of the island for over 1000 and 500 years since the fourth century before Christ is such a mountain considered to be the abodes of gods.

After the Buddha’s Parinibbana (death), the Bhikkhus in and around the State of Bihar met to codify the teachings. The monks took the teachings of the Master throughout India. Further with the patronage of great Emperor Asoka several able and knowledgeable Bhikkhus went to several countries carrying the message of the Enlightened One and the Buddhist culture.

According to legend the mountain of Missaka Pabbata was sanctified by the Buddha three centuries before the advent of Arahath Mahinda.

Although the Buddha is supposed to have visited this country thrice, Ven. H. Sumanagala Thera states, that Buddhism was not introduced to Ceylon till about 250 years after the demise of the Great Teacher.

A vast expansion of Buddhism took place during the regime of Emperor Asoka (266-239 BC), whom H.G. Wells calls “One of the greatest monarchs of history”.

Emperor Ashoka’s son was Mahinda. This according to Hindu and Buddhist mythology it is derived from the Indian name Mahendra meaning great India, Lord of Heaven.

Accompanied by a few Bhikkhus Arahath Mahinda arrived in Ceylon.

They saw King Devanampiyatissa (who the Mahavansa describes as the foremost among all his brothers in virtue and intelligence) who had with party was deer hunting, the favourite sport of the King. Arahath Mahinda arrested the Kings attention saying “Tissa”.

The King was terrified that somebody was addressing him as Tissa. He looked around and saw Arahath Mahinda with his retinue.

Arahath Mahinda said, “O great king we are disciples of the King of Truth. From compassion towards thee we come from Jambudeepa.”

After a series of questions that Arahath Mahinda asked Tissa which historians, consider the first recorded intelligent test in history.

Arahath Mahinda had the following message for King Devanampiyatissa, “O great king the birds of the air and the beasts have an equal right to live and move about in any part of the land as thou.

The land belongs to the people and to all other beings and thou are only the guardian. He added that the Buddhist ruler is called upon to provide not only for the security of the people but assure safe living for the birds and beasts of the land. But where do the birds and beast live if not in the jungles, forests and waters.”

A short discourse took place and Arahath Mahinda preached the Chullahasthipadopama Sutta to the king and his retinue, hearing which they all sought the refuge of the Three Jewels or the Triratne, the Buddha the teacher, the Dhamma, the teachings and the Sangha is the Buddhist order founded by the Buddha.

Taking refuge means that a Buddhist declares his reliance in these three things for release from the sufferings inherent in life. The three jewels (triratne) are central to Buddhism and are the cornerstones of Buddhism.

Mahinda’s Mission was a tremendous success bringing not only the Buddhist religion, but also the Buddhist culture. Buddhism became a State religion at a much later stage. To act against Buddhism was regarded as treason.

Prof. J.B. Dissanayake in his book on Mihintale states that since the arrival of Arahanth Mahinda, the mountain came to be known as Mihintale, plain of Mihidu, the Sinhala name of which the great apostle is known.

The mountain was also known as Cetiya Pabbata and Cetiya Giri, Mountains of Cetiya’s Sacred Relics. Dissanayake adds “after the conversion of the Sinhala king to Buddhism large numbers of men and women from all walks of life left their homes to don the yellow robes.

The yellow robed Monks who dwelt on the hill sides of Mihintale were committed to an ascetic way of life. Simple were their needs and austere their discipline, with the begging bowl in hand they begged for food in the neighbouring villages at the foot of the mountain. They possessed only a couple of robes which they themselves washed.

The caves that provided them shelter from sun and rain are found among the natural boulders that cover the hill sides.

A drip-ledge was cut along the brow to prevent rain water from flowing into the cave. In the shade of these caves and sylvan boughs the Monks spend their times in deep meditation.”

However the picture of Mihintale changed by about the eighth century. There were monastic with assembly halls, refectories and danasala. A Stupa was built at the sight where Arahath Mahinda met King Devanampiyatissa and the Cullahasthipadopama Sutta was delivered. It is here that Buddha Himself spent some time in meditation.

According to Ven. Gnanapala Thera of the Vajirarama Temple the Sacred Cities had pleasure gardens.

The Sinhalese were well versed in horticulture, agriculture and irrigation technology.

Beautiful public parks once adorned ancients cities for both kings and commoner. Vast glades of forest reserves were maintained for the protection of Monks and ascetics as well as for the protection of the fauna. The Agni Purana States that trees provide endless joy to Gods, Gandharvas, Asuras, Kinnars, Nagas, birds, animals and all human beings.

And long before the Westerns thought of ecological balances these good practices had come down from ancient Aryan times, upto the Asokan era.

Sri Lanka’s historical record shows that the first conservation park was set up some 2000 years ago. Buddhism made Lanka more beautiful. The chronicles and inscriptions contain numerous references to parks and gardens. Special care was bestowed on growing of medicinal herbs. Flowering plants were grown for offerings to the Buddha.

Fa-Hsien the Chinese Monk and traveller had come to hear the great virtues of the Monks of Mihintale.