Colombo, Sri Lanka -- Carol singers from Ferguson Girls High School in Ratnapaura held a special performance of singing Poson Carols for the President of the country ,Mahinda Rajapaksa at his official residence at the Temple Trees. 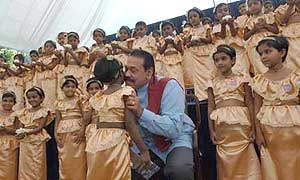 The festival of singing was held June 20th the Poson full moon day, the second most largest Buddhist celebration held in the country to celebrate the arrival of Buddhism, during the time of Emperor Asoka by the Buddhist saint or Arahant Mhainda believed to be the son of the Emperor himself.

Arahant Mahinda caught the reigning king of Sri Lanka then while he was on a deer hunting trip at the Rock of Mihintale at Anuradhapura and coverted him to Buddhism and thereafter the majority of people in Sri Lanka.

His namesake Mahinda is the Buddhist President of Sri Lanka after more than 2300 years.

An overjoyed President presented gifts to the carol singers. Buddhist carol singing was introduced to Sri Lanka more than one hundred years ago by the American Colonel Henry Steel Olcott, who is responsible for the revival of Buddhist education in SriLanka.

Minister Mahinda Ratnathilaka, Gamini Senarath additional secretary to the President and teachers of the Ferguson Girls High School were present at the Festival.