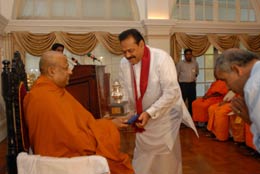 At this serene ceremony there were few participants from U.K. on behalf of the International Buddhist Relief Organisation including Vice- Chairman Dr.M.B.Ranatunga and Mrs.Navamalee Ranatunga, Fund raising Manager Dr.Mrs.Sriya Kulapana, Trustees Drs.Sisira and Rohine Weerakone.

As Sri Lankans we are delighted very much to learn that the most Ven.Dr.Witharandeniye Kassapa thera has been appointed with the O.B.E. (ORDER OF BRITISH EMPIRE) by Her Majesty the Queen Elizabeth 2 earlier this year in her new year’s honours list.

Ven.Kassapa is a living testimony of the advice made by the compassionate, Buddha, “Go forth, ye Bhikkhus, for the welfare and happiness of mankind”. His yeoman service as a Buddhist missionary personality is unique and extraordinary.

He was born into a devout Buddhist family in the peaceful village called Witharandeniya, in the Hambantota District of Sri Lanka in 1953. He entered the Buddhist monastic order was in 1968 under the tutelage of the Most Ven. Deundara Wachchissara Nayaka Thera and the Most Ven.Galaboda Gnanissara Nayake thera.

As a novice monk, he received his monastic training at the Sri Jinaratana Bhikkhu Training Centre, at Gangaramaya, Colombo. He received his higher ordination in 1973. After completion of his monastic training and studies he entered the Kelaniya University of Sri Lanka. And received B.A.degree in 1981 and since then he served as a teacher of the Sri Jinaratana Bhikkhu Training College and the University College and Sri Sudharmarama University Pirivena in Avissawella.

Later on, his realization that his life’s mission is the propagation of the teaching of the compassionate Buddha, directed him to commence his missionary carrier. As a result, accepting the invitation received from the World Fellowship of Buddhists he moved to Dar Es Salaam Buddhist temple in Tanzania, East Africa in 1983, and began his service as the Chief Incumbent of the monastery. At that time, this temple which was established in 1922 remained the only Buddhist temple in Africa. Since then he extended his services to many parts of Africa including Kenya, Zambia, Malawi, Zimbabwe, Botswana and South Africa on cultural and social missions.

In 1986, he was invited by the Baba Saheb Ambedkar Buddhist Association in Birmingham, United Kingdom to lay the foundation for Buddhist cultural and social activities amongst the Ambedkarite Indian Buddhist Community. His contributions and services did not confine to only a certain group of the community. He determined to offer his advice and assistance to almost everybody irrespective of his or her racial, ethnic or religious background.

He pioneered in establishing certain other Buddhist Organisations and institutions both in the United Kingdom and abroad. For instance, Ven.Kassapa founded the East Midlands Buddhist Association known as Leicester Buddhist Vihara, Derby Buddhist Centre and the Milan Buddhist Vihara in Italy. As a mark of great respect and appreciation, it should be noted that the Thera Kassapa while practically experiencing the greatest quality of generosity or giving (Dana) took immediate steps to appoint qualified Bhikkhus as the Chief Incumbents of the Buddhist centres established by him. In 1988, the government of the former Soviet Union and the Most Ven.Hambo Lama, the Chief Sangha Nayake of Mongolia invited Ven.Kassapa, to set up the “Soviet-Anglo Friendship Organisation”.

With the intention of disseminating and propagating Buddhism and related spiritual practices through out the world, it was in 1989, Ven.Kassapa took steps to start a News paper named “The Wisdom” which received the highest recognition amongst not only Buddhist communities hailing from many countries but also the educational institutions through out the world.

In 1992, the Midlands International Buddhist Association of U.K. came into existence under the able guidance of the Thera Kassapa, and this was resulted the establishment of the Birmingham Buddhist Maha Vihara, which probably can be considered the largest Theravada Buddhist Monastery in Europe. In 1997, Ven.Kassapa inaugurated the Milan Buddhist Society with the establishment of the first ever temple in Italy.