Colombo, Sri Lanka -- Given that seven out of 10 people in Sri Lanka are Sinhalese and predominantly Buddhist, Buddha statues are to Sri Lankan tourism what castles are to Scotland – you just can’t get enough of them.

The country’s famous Buddhist trail, which dates back to 247BC, starts in Mihintale and Anuradhapura in the northwestern part of the country, extends to Dambulla and Kandy in central Sri Lanka and ends in Colombo.

The trail is relatively unspoiled by tourism – there are no tourist traps such as trinket vendors – so get there before the world discovers the remote beauty of the Buddhist sites.

The United Nations Educational, Scientific and Cultural Organization (UNESCO) has declared some of the places as World Heritage sites.

There is more to see than just ancient Buddha statues, frescoes and carvings on the Buddhist trail. The journey also takes you through forests, past lakes filled with lotuses in full bloom, paddy fields and lush green hill country.

You can reach Mihintale by flying from Singapore to Colombo and taking either a package tour or hiring a car. The best way to get there is by road.

Ideally, this circuit should be done over a week. If you have just a day to spare, then head straight to Kandy to see the famous Temple of the Sacred Tooth Relic of Buddha.

I skipped the climb to Sri Pada, a 2,234-metre-high mountain which has a large footprint of Lord Buddha embedded at the top. Lord Buddha is said to have visited here during his second trip to Sri Lanka in 523BC.

Get ready to climb 1,840 steps of an ancient stairway to reach the top of the hill where the conversion took place.

A temple was built to mark the conversion. It is the oldest temple in Sri Lanka. Around it you see carvings, guard stones and the remains of 68 caves built for Buddhist monks. 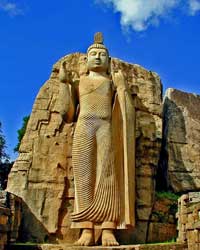 Make sure you visit the sacred Bo Tree. It is said that Mahinda was given a cutting of the Bo tree under which Lord Buddha attained enlightenment. This was planted in Anuradhapura.

Polonnaruwa
My third stop was Polonnaruwa, an hour’s drive from Anuradhapura. This city is full of old buildings, ruins and Buddha statues. And there aren’t too many steps to climb.

After seeing how the city is laid out and what the main sites are, drive to see the vatadage. This is a circular relic house which consists of a small central pagoda. Here, four Buddha statues are encircled by rows of beautifully carved columns.

Sigiriya
Make sure you rest well and start early to take on the 5th-century rock fortress of Sigiriya.

Kandy
Kandy was the last stronghold of the Sri Lankan kings against a series of colonial invaders. The main attraction is the Dalada Maligawa or the Temple of the Sacred Tooth Relic of the Buddha.

Constructed during the 17th and 18th centuries, a tooth of Lord Buddha is enshrined in this temple. Tourists can attend the three religious services that are held daily at dawn, noon and in the evening.

In the hills around Kandy, many temples feature distinctive architecture, murals and carvings.

Colombo
Once you are back in the capital, visit the Gangarama temple. It has donations of Buddhist monuments from all over the world.

Also visit the Kelaniya suburb in Colombo. In 520BC, Lord Buddha was invited to preach by the King of Kelaniya. Today, the Kelaniya Raja Maha Vihara is in a park-like setting, just 9 kilometres from Colombo.

The main courtyard has a vihara or shrine house, a stupa and a sacred Bo tree. The vihara has been destroyed and rebuilt many times. Its walls and ceilings are decorated with frescoes.

Do:
1. Take a good pair of walking shoes, plenty of sunscreen, a hat and plenty of water. Be prepared for steep climbs, lots of steps and a lot of walking. In most places you need to take your shoes off before entering the main shrines. Even at 10 a.m., the floor around the shrines gets hot.

2. Always carry your passport with you. Security is tight in places like Anuradhapura and your bags will be thoroughly checked before you can enter the temple.

3. Make sure you have enough cash. Most places in the interior don’t have credit card facilities.

4. Plan your day carefully. Start early; most places are unbearably hot by noon.

1. Don’t touch, pose or take pictures with your back towards the Buddha statues as it is considered disrespectful. In some places, photography of the statues and sites is prohibited. Make sure you read the signs.

2. The weather is hot and humid, but don’t dress skimpily when visiting the Buddhist shrines. In fact, covering your arms in light cotton clothing makes walking in the sun a lot easier.