Binara is significant to seek success on persistent determination

Colombo, Sri Lanka -- Today is the Binara Full Moon Poya Day. There are four Pasaloswaka Poyas - Esala, Nikini, Binara and Wap and it is a four month period and the period in India it has been know as rainy season, specially where Lord Buddha lived. 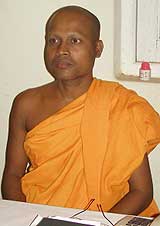 Yet it is a blossoming season with a clear sky blue in the day time and bright in the night with stars sparkling. We have to go to the Buddha era to visualize the bright sparkling and pleasant period called ‘Was’.

Venerable Niwandama Samitha Thero from  Viharadhipathi, Niwandama Deepadukkaramaya Purana Viharaya, explaining the significance of Binara Full Moon Poya said that during this Was period Buddhist Monks would be immobile and are expected to recede to their Temples, Viharas and other Monasteries to devote their time to preach Dhamma and look after the well being of the people and the people who patronage the Buddhist places of worship where the Monks congregate.

People in turn provide the needs of the Monks with Alms, Saffron Robes and accommodation.

Since his demise, Ven Samitha Thero, took over torch from His revered Dhammakirthi Nayake Thero to continue to be a beacon of light in enlightening the Buddha Dhamma in the same vain as his Leader. He is proving his scholastic prowess to spread Dhamma through various media.

Ven Samitha Thero said that during this pious period the devotees of these Buddhist places of Worship in an unbroken tradition ever since from Lord Buddha’s era, take special interest in providing all the needs of the stationed monks in their temples etc.

He said Binara is the most pleasant time and it could be compared to summer season (Sarath Irthuwa). Bikkhus all over the world would remain in their abodes, may it be temples, viharas, ashrams, monasteries or hermitages during this period.

With sheer determination and also with strong conviction to somehow or other become a Buddhist Nun, with 500 other princess who too were in the same determination to be part to this great religious following, started on foot from Kapilawatu City to Nigrodharamaya where Lord Buddha was living.

The journey was not a simple matter. Their devotion, determination and conviction was unprecedented these women with tender bodies who were in the comfort of princely living, rejected all those comforts, shaved their beautiful hair, and adorned with saffron robes and passed a distance of 51 Yodun (a yodun is considered to be 4 miles) and going by this calculation these ladies have passed more than 200 miles on foot to reach where Lord Buddha was residing.

According to Buddhist scripture, expressed by Ven Samitha Thero when these ladies arrived their clothes were torn, their tender bodies were disfigured due to the tormenting rough journey. Their feet were ruptured and were bleeding. But all these torments, pain and roughness were overcome due to the great interest and determination to be ordained as Buddhist nuns to follow the foot steps of Lord Buddha in the same way as their male counterparts.

When these ladies arrived at the entrance ( the gates) where Lord Buddha was residing, Ven Ananda Thero the chief disciple of Lord Buddha met them there. Then Gothami Devi vehemently pleaded that they be ordained as Buddhist Nuns. Lord Buddha had said that females were not suitable to become Buddhist nuns.

While Lord Buddha was in Wisala City in the Kutagara (meeting hall) these ladies were there with Gothami Devi leading them to implore Lord Buddha permission to become Buddhist nuns. It was the Binara Full Moon Poya when these princesses came to Kutagara. Lord Buddha did not receive them, but it was Ven Ananda Thero who again met them at the gates to Kutagara and carried the message to Lord Buddha.

Lord Buddha three times refused to accede to the request. But Ven Ananda please and implored that these ladies be at least become Anagarikas. Anagarikas are not full pledged Monks. They could be divested from worldly comforts and Upasampadawa.

There were five chief disciples – Ananda, Baku, Kunda, Devadatta and Upai. Ven Ananda was a Sakya Wansika and was also related to Lord Buddha and thus he was well suited to be the right emissary. While Lord Buddha refused, Ven Ananda Thero did not give up his pleadings on behalf of these princesses and also the determination of the ladies led by Gothami Devi too was not shattered.

At last Lord Buddha agreed to Ven Ananda Thero’s reasoning and said that these ladies should observe the eight Garu Dhammas. These are the eight disciplinery precepts determined by Lord Buddha for the Mehenin Wahanses.

Gothami Devi and others received this great news with their whole heart and they were stupendously happy. Thus the Binara Full Moon Poya is a great day all the women in the world where the unshattered determination of Gothami Devi melted the heart of Lord Buddha brought the women-kind to become the clergy in the Buddha Sasana, though it is at a lesser degree.

Ven Samitha Thero said that event and the occasion gave a tremendous impetus not only to the women kind but the path for success as unfettered and persistent determination on a good cause could attain great results.

He said that they used to hear from the media about many Sri Lankan business people, who start very low under very difficult conditions, with sheer determination achieve very high results where they shine as big entrepreneurs and also there are large number of government servant who reach the pinnacle of their career to the highest echelons in their respective administrative services.

He said that this Buddhist way of life has now become traditions and customs in the country and turns to be the Buddhist Civilization. (Sinhala Sirith Virith).

In the past our Bikkhus have visited households where there were pregnant mothers and chanted Seth Pirith for the repose of the child to be born which prevented mortality in mothers and infants. Today there is the tradition of resorting to Bodhi Poojas to bring in merit to pregnant mothers.

He said “once the baby is born, there is the tradition of taking the infant to the Temple and with Pirith chanting the Bikkhus bestow blessings to the new born child. First hair cutting, feeding rice, reading letters have earlier been performed centering the Buddhist traditions and most of the parents either took their children to the temple or invited the Bikkhus to their homes for such purposes

Looking after elders, resolving old conflicts among rivals, improving friendship, are all traditions emanating from Buddhist way of life. Before commissioning to build a new house, starting a new job, commencing a business all have a religious base on Buddhist traditions. Traditions are also common in reaping the harvest. Kiribath is cooked from the harvested rice and is offered as a Buddha Pooja.

Death is the most significant thing in life and from the time a person dies until the corpse is buried there are a number of rituals based on Buddhist traditions. Ven Dharmakirti said a Bikkhu is called to chant Pirith at the dying bed of a person and this would console aggrieved parties and bring solace the person dying. He pointed out that thus from birth to the death there is a chain of Buddhist rituals and traditions that has to be adhered to.