New Delhi, India -- It is the wish of every Buddhist to end his/her samsara journey by attaining nibbana. Yet, they also wish to appraise a living Buddha, before ending their painful and sorrowful journey through life. 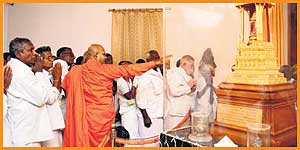 A group of Sri Lankan pilgrims to sacred Dambadiva (India), the land of Lord Buddha’s birth, had the rarest opportunity, not only to see the corporeal relics of the Lord but also, take part in a special chanting session of the first sermon that the Buddha delivered after enlightenment.

Not many Sri Lankans are aware that Lord Buddha’s corporeal relics are preserved in the National Museum at New Delhi and opened for public viewing.

Although the Sacred Tooth Relic is preserved at the Dalada Maligawa in Kandy, the devotees can only appraise the golden casket containing the relic.

Yet, at the National Museum, New Delhi the devotees can see the particles of corporeal relics through a glass casing. The sacred relics are placed on a glass structure surrounded by gilded decorations. The white bone particles of the Buddha are carefully placed on velvet surfaces.

On Saturday, October 18, several dozens of Sri Lankan pilgrims gathered at the Buddhist Art Gallery at the Museum and the group of Buddhist monks who accompanied them, started chanting Dhammachakkappavaththana Sutta (the first sermon).

At the end of more than an-hour long chanting session, the devotees were led to the glass casket, to observe with their naked eyes, the holiest of relics for any Buddhist.

In the eyes of many, there were tears of joy, upon seeing their Lord. Some were speechless, while others said that, they were finally able to see the living Buddha. According to several Buddhist monks present on the occasion, worshipping the corporeal relics of the Buddha, can shorten the samsara journey.

It is Sir Alexander Cunningham who deserves credit for excavating these relics from Kapilavastu. He was a British archaeologist and army engineer, known as the father of Archaeological Survey of India.
During his many journeys throughout northern India, he uncovered many sites of historical importance. It was during one of his excavation expeditions that, he discovered the two jars containing the corporeal relics.

The historical chronicles record that, after the Buddha’s Parinibbana, the holy relics taken from the cremation site were divided into eight groups, and handed over to separate groups for preservation.

The oldest authority on Buddha relics, Mahaparinibbana Suttanta, written approximately in the fifth century B.C., lists the groups to whom the relics were handed over to: Ajasatta, King of Magadha; Licchavis of Vesali; Sakyas of Kapilavastu; Bulis of Allakappa; Koliyas of Ramagama; Brahmin of Vethadipa; Mallas of Pava; Mallas of Kusinara.

The relics excavated by Sir Cunningham, were given to the Sakyas of Kapilavastu.

Several thousands of Buddhist pilgrims visit India every year to appraise the places of Buddha’s birth, enlightenment and parinibbana. But not many visit the National Museum, to see the extraordinary sight of more than 2,550-year-old corporeal relics of the Buddha.

The rare opportunity to take part in the chanting session, was part of the efforts made by the Sri Lankan High Commission in New Delhi, led by acting High Commissioner Palitha Ganegoda. The event was oraganised with the sponsorship of Sethsiri Lanka Travels and its owner Upul Weerasekera.