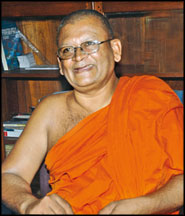 Ven. Rahula Thera is the only Buddhist monk serving at the Social Services Department. He is the Chief Incumbent of the Temple of Social Services, Araliya Uyana, Depanama, Pannipitiya. With over 20 years experience in the Public Service, the Thera has worked at over 20 Government institutions. This may be a historic instance in the country’s Public Service as no government official has made such a request earlier to voluntarily serve in the Jaffna peninsula.

The Thera told the Daily News that he voluntarily decided to go to Jaffna to serve the people there by considering it as a most urgent requirement and to encourage the humanitarian operations launched by the Armed Forces.

Bhikkus have made such sacrifices during our past history as well. Therefore this may be an example to all officials working in the Public Service, he said.

The Thera said he first met President Rajapaksa and expressed his willingness to serve in Jaffna by seeking an immediate transfer. The President has commended the bold move taken by the thera to serve the people of Jaffna who have been faced with immense difficulties due to terrorist activities. The Thera has also met Social Services Minister Douglas Devananda with his request for an immediate transfer to Jaffna.

Minister Devananda who highly admired the praiseworthy attempt of Rahula Thera has forwarded his letter to Public Service Commission.

The Minister has requested the Commission to release the Thera from the Public Service of the Western Provincial Council and absorb him to the Central Ministry by immediately transferring him to a District Secretariat or Divisional Secretariat in the Northern Province to fill an existing vacancy.

The Thera said this would be a great opportunity for him to serve the people in the Jaffna peninsula and also extend his service to a number of religious places in Jaffna. The Thera is also writing a book on his 20 year experience gained in the Public Service.

He hopes to receive his transfer letter to Jaffna with the utmost desire of serving the people.