Myanmar Monks's alms for the victims of Tamil war 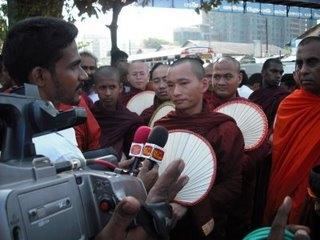 The ceremony began at 4 pm in Colombo. Sri Lankan people donated food, clothes and money to the monks. Monks then donated those alms to the victims of Tamil war.

"We are all really happy to have the chance to help the victims of Tamil war. Sri Lankan people have helped a lot during the Nargis cyclone in Myanmar, so now we are happy to have the opportunity to help you.", is what the secretary monk Ven. Sobhana stated during his interview with reporters.

Several Sri Lankan Buddhist monks came to support the Myanmar monks and more than 100 monks from both countries participated the ceremony.

The fight between Sri Lankan government and Tamil Tigers is an ongoing issue and recently more than 50 000 civilians have found themselves in a situation where their lives are seriously affected.

Myanmar monks are grateful to all those who got involved and they hope that there will be more opportunities in the future to organize similar events, as there are still many civilians who are in need of basic supplies such as food, clothing and medicines.