A special Vesak issue of "The Buddhist"

Colombo, Sri Lanka -- The Colombo Young Men's Buddhist Association released a special issue of "The Buddhist" for Vesak this year. 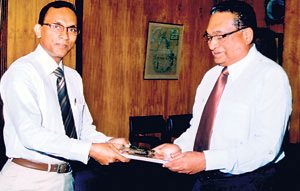 Apart from articles and poems on the Dhamma in English and Sinhala as in previous publications, the journal has valuable information on the history of the Association and its present activities along with colourful photographs. A few articles, poems and interesting snippets from past publications of this journal, which is now 111 years old, are also included.

"The Buddhist" Journal started by the Buddhist Theosophical Society (BTS) was taken over by the Colombo YMBA in 1902 and has been published by the Association since then. It is perhaps the oldest English Buddhist Journal in the world, being first published in 1888. It is now a quarterly and carries articles and poems in both English and Sinhala languages.

The journal is issued to all members of the association free-of-charge. This journal was edited by Rajah Kuruppu, a Vice President of the Colombo YMBA. The first copy of this special issue was presented by Prasanna Goonetilleke, President of the Colombo YMBA to Prithiviraj de Silva, Finance Director of Lake House Printers and Publishers Ltd. Dushantha Ahangama of Saatchi & Saatchi handled the design and RS Printek (Pvt) Limited the production of the journal.

"The Buddhist" special Vesak issue is now available for collection by members at the Colombo YMBA Head Office at No. 70, D.S. Senanayake Mawatha, Colombo 8 during working days.