Address by Urban Development Minister Rohana Kumara Dissanayake at the celebration held at Buddhagaya, India on the occasion of the birth anniversary of Anagarika Dharmapala 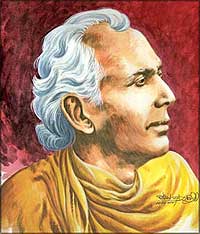 Sri Lanka was then a British colony known as Ceylon, so Hewavitarana’s state education was an English one: he attended Christian College, Kotte and the Colombo Academy, now known as Royal College. A major portion of their family riches had to be spent for the upliftment of Buddhist Dhamma education and the propagation of the Buddha Dhamma because one of their sons, Don David trod the path of the Buddha Dhamma.
Erudite monks

Those were the British colonial days and it was considered a prestigious thing to join the public service as a clerk, so in 1883 Dharmapala joined the public service as a clerk. His public service career was limited to three years as he left the service in 1886 to devote his full time for religious activities, joining the Theosophical Society, headed by an American, Colonel Henry Steele Olcott. Later, he became the secretary of the society. By now, he changed his Biblical name Don David to Dharmapala Hewavitharana. The Buddhist Theosophical Society, under his guidance was able to establish Buddhist schools throughout the island which saw the birth of Ananda, Nalanda, Mahinda, Dharmaraja Colleges for boys and Vishaka, Mahamaya and Sangamitta for girls.

Dharmapala not only concentrated on education, but also contributed towards the upliftment of the rural economy by starting vocational training centres for carpentry, handloom textiles and other rural cottage industries. He traversed the entire length and breadth of the country, propagating the doctrine of the Buddha in a specially improvised vehicle for this purpose. The living members of some Buddhist families in the hill country still remember with nostalgia the time spent with Dharmapala, who stayed with them on his ‘Dhamma’ missions in the hill country.

The landmark of his career began when he met a Russian lady, Mrs. Blavatsky with whom he went to Adayar, South India to study Theosophy.
Foreign domination

He visited Isipatana in January 1891. He came to Buddhagaya on January 22, 1891 and he kept his forehead on the ground and made this strong commitment to clear the premises from foreign domination. The entry made in his personal diary states thus. ‘As soon as I touched with my forehead the ‘Vajirasana’ a sudden impulse came to my mind. It prompted me to stop here and take care of the sacred spot, so sacred that nothing in this world is equal to this place where prince Sakiyasingha gained Enlightenment under the Bodhi tree.

This incident saw the birth of the ‘Maha Bodhi’ Society on April 31, 1891, under the patronage of Hikkaduwe Sri Sumangala thera. Dharmapala became the Secretary of this organization. It is recorded that he donated Rs. 100,000 to the then British Governor Sir William Manning for the supply of rations to the poor who were hit by a famine in Sri Lanka in 1919. This was the same Governor who was in India when Dharmapala was ordered to leave India by the Courts.

Buddhist places of worship in Kashmir were destroyed by Sikandar. When Dharmapala visited Saranath in January 1891, it was a place for hog breading. Only an area belonging to the Jains, where there was a shrine spared by the hog breeders. It was in January 1901 that Dharmapala was able to purchase a block of land from Isipatana. Today, there are eight schools here managed by the ‘Maha Bodhi’ Society. One of these schools was funded by the mother of our hero, Mallika Hewavitharana who was 85 years old at the time. The school started in June 1904 was funded by Lady Foster. This area was known as ‘Kasirata’ in the olden days.
Vesak holiday

The splendour of this area could be enjoyed today only due to the untiring efforts of Dharmapala, who brought back the pristine glory of the area. He was not only able to get a Vesak Poya of 24 May 1918 gazetted as a public holiday but also was able to get a Vesak holiday for all the Buddhist children attending schools in Calcutta, Bengal and other cities. It was, Dharmapala who rescued Budhagaya from Saivite Mahanta.

Dharmapala had to go to courts on many occasions to stop Mahanta from defacing the Buddha statues. He was also jailed as a result of his Buddhist activities. Having lived in India for 44 years, he participated in the second anniversary of the ‘Moolagandakuti Vihara’ restoration held on November 11, 1932, with the participation of a distinguished gathering, including Sri Jawaharlal Nehru, his wife, daughter Indira and sister Vijayalakshmi Pandit on January 16, 1933. A ‘Seemamalaka’ area of 50 ft x 50 ft with eight stone pillars was built and Dharmapala was ordained as Venerable Siri Devamitta Dharmapala.

This was a time of Buddhist revival. In 1875 in New York, Madame Blavatsky and Colonel Olcott had founded the Theosophical Society. They were both very sympathetic to what they understood of Buddhism and in 1880 they arrived in Ceylon, declared themselves to be Buddhists. Colonel Olcott kept coming back to Ceylon and devoted himself in Ceylon to the cause of Buddhist education, eventually setting up more than 300 Buddhist schools, some of which are still in existence. It was in this period that Hewavitarane changed his name to Anagarika Dharmapala.

‘Dharmapala’ means ‘protector of the dharma’. ‘Anagarika’, a term coined by Dharmapala himself, means ‘homeless one.’ It is a midway status between monk and layperson. Dharmapala was the first Anagarika - that is, a celibate, full-time worker for Buddhism - in modern times. It seems that he took a vow of celibacy at the age of eight and remained faithful to it all his life. Although he wore a yellow robe, it was not of the traditional Bhikkhu pattern, and he did not shave his head. He felt that the observance of all the Vinaya rules would get in the way of his work, especially as he flew around the world. Neither the title nor the office became popular, but in this role, he was the model for lay activism in modern Buddhism. In fact, he is widely considered a Bodhisattva in Sri Lanka. His trip to Buddha Gaya was inspired by an 1885 visit there by Sir Edwin Arnold, author of The Light of Asia, who soon started advocating for the renovation of the site and its return to Buddhist care.
Young Dharmapala

The young Dharmapala helped Colonel Olcott in his work, particularly by acting as his translator. Dharmapala also became quite close to Madame Blavatsky, who advised him to study Pali and to work for the good of humanity - which is what he did. It was at this time that he changed his name to Dharmapala (meaning ‘Guardian of the Dharma’).

In 1891, Anagarika Dharmapala was on a pilgrimage to the recently restored Mahabodhi Temple, where Siddhartha Gautama - the Buddha - attained Enlightenment at Buddha Gaya, India. Here he experienced a shock to find the temple in the hands of a Saivite priest, the Buddha image transformed into a Hindu icon and Buddhists barred from worship. As a result, he began an agitation movement.

The Mahabodhi Society at Colombo was founded in 1891 but its offices were soon moved to Calcutta the following year in 1892. One of its primary aims was the restoration to Buddhist control of the Mahabodhi Temple at Buddha Gaya, the chief of the four ancient Buddhist holy sites.

To accomplish this, Dharmapala initiated a lawsuit against the Brahmin priests who had held control of the site for centuries. After a protracted struggle, this was successful, with the partial restoration of the site to the management of the Maha Bodhi Society in 1949.

In 1893 Dharmapala was invited to attend the World Parliament of Religions in Chicago as a representative of ‘Southern Buddhism’ - which was the term applied at that time to Theravada Buddhism. He was a great success and by his early thirties he was already a global figure, continuing to travel and give lectures and establish Viharas around the world during the next forty years. At the same time he concentrated on establishing schools and hospitals in Ceylon and building temples and Viharas in India. Among the most important of the temples he built was one at Sarnath, where the Buddha first taught.

The term ‘Protestant Buddhism,’ coined by scholars Gananath Obeyesekere, is often applied to Dharmapala’s form of Buddhism. It is Protestant in two ways. First, it is influenced by Protestant ideals such as freedom from religious institutions, freedom of conscience, and focus on individual interior experience. Second, it is in itself a protest against claims of Christian superiority, colonialism and Christian missionary work aimed at weakening Buddhism. “Its salient characteristic is the importance it assigns to the laity. It arose among the new, literate, middle class cantered in Colombo.

Dharmapala is an excellent example of an Asian Buddhist modernist, and perhaps the paradigm example of Protestant Buddhism. He is particularly concerned with presenting Buddhism as consistent with science, especially the theory of evolution. A paper titled ‘The World’s debt to Buddha’, was read by Dharmapala to a crowded session of the Parliament of World Religions in Chicago, on September 18, 1893. At this early stage of his career, Dharmapala was concerned with making Buddhism palatable to his Western audience.

In the later stages of his career, Dharmapala’s vociferous anti-Christian tone is more evident. Dharmapala must be understood in the context of British colonization of Sri Lanka and the presence of Christian missionaries there. This work is a good example of ‘Protestant Buddhism,’ as described above.

Several Sri Lankans participated in the auspicious occasion held in Benares, where Ven. Siri Devamitta Dharmapala obtained Higher Ordination. Ven. Devamitta Dharmapala lived hardly four months after this event and passed away on April 29, 1933 at the age of 69. The whole Buddhist world mourned the demise of this great son of Sri Lanka.

It is very important to realize that the strong sayings and work of Dharmapala have to be understood in the context of the times, that era of British colonialism when Buddhism was exploited by the colonial masters.

Dharmapala’s name will be honoured and remembered by generations of Buddhists the world over because he awoke Buddhists from their deep slumber and infused a sense of patriotism to their hearts and minds.

Unlike during the British colonial era of the 19th Century, today the order of the day is religious harmony and amity among people of different religions. When the tsunami hit us in Sri Lanka, people of all religious denominations, the Buddhists, Christians, Muslims and Hindus joined hands in providing relief to those struck by the tsunami disaster. Today in Sri Lanka and in many parts of Asia there is a lot of dialogue between different religions unlike the days of British colonialism.

Recently in Sri Lanka when the terrorist outfit of the LTTE was completely routed by the humanitarian efforts of the Sri Lanka Armed Forces and several thousands of Hindu Tamils were rendered homeless, the people of all religions rallied round and helped to feed the Tamils who were displaced from their homes.

Therefore unlike during the time of Anagarika Dharmapala there is no religious confrontation. Today it is pleasing to see the Christian clergy attending Buddhist functions, and the Muslim Lebbe and the Hindu Poosari and the Buddhist monk participating mutually in the different functions of their different religions. As a Minister of State of the Sri Lanka Government I am happy to state that our Government of President Mahinda Rajapaksa is giving top priority to rebuilding all the Buddhist shrines which were destroyed by the ruthless LTTE in the Northern and Eastern provinces of Sri Lanka. In this work of restoration of all Buddhist shrines, the Government of President Mahinda Rajapaksa is indeed following the example set by Anagarika Dharmapala.