Kamaishi, Japan -- Ikuo Fujiwara stops in front of the wreckage of the Buddhist temple, brings his hands together and prays. 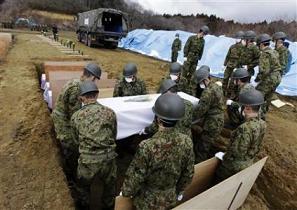 The monk bursts into tears, an involuntary act, as he asks heaven what he can do to comfort his destroyed hometown and begin to rebuild his house of worship.

Fujiwara needs heaven to speak to him, for he must preside over Kamaishi's first mass burials in memory. Behind his temple, the sound of heavy machinery digging giant ditches for unmarked coffins echoes through the shattered remains of the 300-year-old building.

"We don't have enough places to cremate the bodies," says Fujiwara. "So temporarily, we're burying the bodies here."

The ditches sit within 50 meters of the Buddhist burial plots, where cremated remains lie underneath grey headstones. This is a sacred practice that every Japanese person expects at death, explains Fujiwara. A Japanese funeral is elaborate, formal, and ritualized in the Buddhist faith.

So the wide ditches and the coffins, which will eventually lie in them side by side, are an unbearable insult in the minds of ordinary Japanese citizens.

But ordinary expectations have been abandoned in Japan's tsunami zone, where entire towns were decimated by a wall of water that struck in the wake of a magnitude-9.0 earthquake March 11.

"I feel very sad about this," says Fujiwara, adding that the mass graves are only one component of the overwhelming pain felt throughout Kamaishi. "My friends and my temple members, I don't know yet how many of them I lost. And the town is destroyed. I'm concerned if we can rebuild."

Fujiwara doesn't look like the monk of this temple, wearing a fisherman's boots and winter coat. The tsunami destroyed all of his robes. Like many of the tsunami victims mourning the dead, he can't dress in proper funeral attire.

Fujiwara says he will still try to administer the most respectful service he can offer to the survivors who will line the ditches. But he knows in the minds of many of those families, it will never replace a proper Japanese Buddhist ceremony.

However, city health leaders say they have no choice but to bury the dead in mass graves. Thousands of bodies pulled from the rubble have been stored in school gymnasiums-turned-morgues.

About 17,000 people remain missing, so officials believe more bodies will be recovered. Even if they can be identified, the crematoriums on Japan's northern coastline are either damaged from the tsunami or already full. A shortage of gas has meant bodies can't be taken to other parts of the country for cremation.

Stressing the burials will be temporary, cities have begun the process of placing bodies in mass graves to prevent disease outbreak.

Tadaharu Kinoshita, searching through Kamaishi's morgues for his brother, says it hurts his heart to think of his kin lying in a mass grave.

But there is a greater indignity, he says.

"My one hope is to find his body," says Kinoshita. "If he remains missing, we'll never really know. Even if he's in a mass grave, at least then, we'll know."