ISHINOMAKI, Miyagi Pref. (Japan) -- The Dalai Lama on Saturday visited an area devastated by the March earthquake and tsunami and took part in a Buddhist memorial service for the victims. 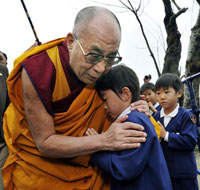 The 76-year-old Tibetan spiritual leader offered words of encouragement to survivors during the service at Saiko Temple in Ishinomaki, Miyagi Prefecture.

With about 1,000 people attending, the Dalai Lama said that as a human being he shares the pain of survivors who lost their loved ones, and that he hopes people will be able to overcome their sorrow and rebuild their lives.

In Ishinomaki, about 3,800 people were killed or went missing in the disaster, the largest number of victims in a single municipality.

The Dalai Lama also plans to visit other hard-hit areas, including Sendai and Koriyama, Fukushima Prefecture.

He visited Tokyo in April and held a special Buddhist service for victims of the March 11 disaster, but was unable to visit the devastated area.

Before his visit to Ishinomaki, the Dalai Lama, who arrived in Japan on Oct. 29, made a speech in the city of Osaka and visited Wakayama Prefecture's Koyasan University, which is affiliated with Koyasan Kongobuji Temple. The university invited the Dalai Lama to celebrate its 125th anniversary.