Tokyo, Japan -- In a corner of the Toranomon district of Tokyo's Minato Ward, where men and women in business suits hurriedly come and go, lies Komyoji Temple. 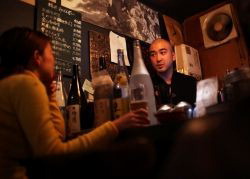 The main hall's second floor is a terrace equipped with tables and chairs, where visitors can enjoy a view of Tokyo Tower. Around noon, one sees women eating lunch in the space, called Kamiyacho Open Terrace. The manager, Takeshi Kihara, 33, has a shaved head, gentle eyes, and a clean-cut air. He is, in fact, a Buddhist priest.

From around April to fall every year, visitors can make reservations to be treated to Kihara's homemade sweets and coffee at the terrace for free. "Please come in," Kihara says, as he leads me into the temple's main hall, where he begins reciting sutras. Thankfully, I've been offered a chair.

Without the discomfort of sitting with one's legs tucked underneath as one usually does in temples, it's much easier to let the sutras sink in. I start to relax.

Komyoji opened the terrace to the public in 2005, at the suggestion of young priests who wanted to provide non-parishioners a chance to become familiar with Buddha and Buddhism.

Kihara had not been born into a priests' family. Neither had he majored in Buddhism in college. It was a visit he made to a friend working at Komyoji as a priest during a time of Kihara's own confusion and distress over his post-college career and life plans that eventually led him to choose the profession. He studied "keicho," or what could be described as the art of close listening, and received certification as a Buddhist priest.

After reciting sutras for a man likely in his 20s who had approached him about some of his troubles, Kihara says, "I think that after the Great East Japan Earthquake, there have been more visitors coming here for peace of mind and spiritual enrichment. There has been more conversation, too."

The terrace may be a kind of urban oasis for a woman in her 40s, who is eating lunch by herself there. "I come here almost every day to eat lunch," she says. "Apart from the atmosphere, the casual words I exchange with the priest are comforting."

Meanwhile, editor Junko Takada, who oversaw the March publication of "Bibozu zukan" (Catalog of Beautiful Buddhist Priests), featuring photos and profiles of 40 "beautiful" priests, says that the reason for publishing the book was because of her acquaintances who seemed to be facing challenges in their lives.

"Seeing younger women from my old workplace facing problems regarding marriage and careers, I wanted to let people know that there are wonderful priests who will listen to and help with our troubles. Some of the priests have gone to disaster areas after the Great East Japan Earthquake to do volunteer work or help with funerals," Takada says. "Another reason (for publishing the book) is because I don't want people falling for dodgy fortune tellers and what not."

With the "catalog" in hand, I venture over to Vowz Bar in the Yotsuya Sanchome area of Tokyo's Shinjuku Ward. One of the first of its kind, Vowz -- which refers to the Japanese word "bozu," meaning Buddhist priest -- opened in 2000.

Right inside the entrance is an altar and the smell of incense. Fifteen customers are enough to fill up the space, but there are more than 100 drinks on the menu. Five Buddhist priests work here, and almost every day, a time is set aside for sermons.

The bar's manager is 35-year-old Yoshinobu Fujioka. He'd ranked third nationwide in boxing when he was a college student, but quit the sport when he suffered an eye injury. That was when he happened upon Buddhism. For him, too, the reason he started the bar was because he wanted to be someplace where he could meet with and listen to the problems of everyday people.

Fujioka's family runs a Buddhist vegetarian restaurant, and because of this, items on the Vowz menu are dominated by tofu and other vegetarian items. Impressed with the finesse with which he handles the cocktail shaker, I order a drink. Called "Aiyoku jigoku," or "Lust is Hell," the drink has the bright red color of cranberry juice, but its base is a habu snake liquor.

An hour after opening, the bar is bustling with customers. I approach a woman sitting at the counter. At age 34 and single, she says "life is hard." She has round eyes and an intelligent air about her. "I've lost my job before, and the same thing is happening to people I know. I want to get married, but I don't know if it would bring me happiness," she says. Just then, the bar shakes and Fujioka puts up his arms to stop bottles of liquor from toppling off the shelves. It's a fairly large earthquake.

Regaining her composure, the woman continues, "I think it's important to talk about our problems with friends, but I came here because I wanted some input that I'd find convincing. I think there are a lot of women like that. After all, we're still experiencing pretty big earthquakes like we just did, and every day we are made to feel the fact that we're living in an uncertain time."

It seems like a good opportunity to ask Fujioka for advice about my own problems, so I do. "I figure if I can rid myself of my desires, I wouldn't have to cling to them, and that would make life easier," I say. I have material desires and a thirst for money; embarrassingly enough, all I have are wants, really.

After a pause, Fujioka says, "There's no need to cast away one's desires, and it would be difficult to do so anyway. Plus, there are times when things go well precisely because of one's desires. I think it's a matter of how you approach them." So in short, there's no easy answer.

Novelist and Pure Land Buddhism priest Ran Kawanishi, 52, says that the recent foray of young priests into new fields and activities is a reflection of the crisis Buddhism faces in Japan today. "In the outlying regions, diminishing numbers of parishioners has made it difficult to maintain temples, while in the cities, there have always been a shortage of opportunities and places where people come in contact with Buddhism.

There's the sense that Buddhism is in crisis, and (the various ways in which young priests are interacting with society) are perhaps a form of proselytization.

"Facing a stagnant economy and a massive quake disaster has made people -- especially those living in the cities -- feel more isolated and anxious. Defending individualism or maintaining freedom requires one to tolerate some degree of solitude, but I feel that a lot of people have lost the tolerance for that. And perhaps that's why people are looking to Buddhism and priests for emotional stability."

Kawanishi is hopeful for the young priests who are actively seeking social interaction. "This is often misunderstood, but Buddhism does not exist for the purpose of funerals or for those who have died. It exists to make those of us who are still in this life happy," he says. "The people who spread Buddhist teachings are priests, and our responsibilities are getting greater."