Kyodo, Japan -- Novelist and Buddhist nun Jakucho Setouchi joined a hunger strike Wednesday in front of the industry ministry in Tokyo in protest the government's moves to restart idled reactors at the Oi nuclear power plant in Fukui Prefecture. 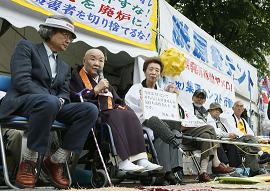 Setouchi, 89, together with writers Hisae Sawachi, 81, and Satoshi Kamata, 73, plans to stage her hunger strike until sunset.

The antinuclear civic group began the hunger strike on April 17 in front of the Ministry of Economy, Trade and Industry, which oversees nuclear power plant operators, in Tokyo's Kasumigaseki district, home to a number of government buildings.

The group plans to continue its hunger strike until Saturday, when the country's last operating commercial nuclear reactor, unit 3 of Hokkaido Electric Power Co.'s Tomari plant, is due to go offline for routine checks.

Pinning a band with the message "no to reactivation" to her nun's habit, Setouchi said Japan is in as bad a state as she has known in her almost 90 years of life.

"I can't hand over the current Japan to the younger generation," she said.

In the wake of the disaster-triggered nuclear crisis in Fukushima Prefecture, Setouchi described the government's moves to restart two idled reactors at Kansai Electric Power Co.'s Oi plant as "scary."

"I think (the government) is acting strangely," she said.