Nagano, Japan -- Situated in Nagano, Japan is one of the oldest temples dedicated to the Buddha. Built in the 7th century, it is believed to house the first Buddhist statue brought to Japan and is therefore visited by millions of pilgrims every year. 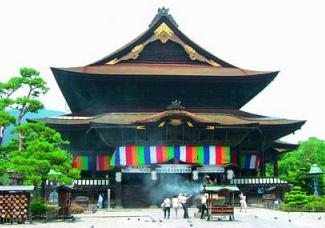 The Zenkoji Temple was built before Buddhism split into various schools and presently belongs to the Tendai and Jodoshu schools of Buddhism. According to legend, the image caused a dispute between the two clans and was, therefore, thrown into a canal.

The image was later rescued by Yoshimitsu Honda and the temple was named Zenko, the Chinese transliteration of Yoshimitsu’s name.

The main image at the temple is that of a hidden Buddha and is not shown to the public and nor the priests. This is one of the commandments of the temple: to keep the statue in absolute secrecy.

The temple has an inner chamber that is open to visitors. This chamber has a narrow staircase that leads to a dark corridor where worshippers try to touch the metal keys hanging on the wall to gain enlightenment.

Inside the compound, which is arranged in a linear manner, is the Kyozo which is said to store the Buddhist sutras.