Wakayama, Japan -- An increasing number of Buddhist temples have been joining the match making boom of recent years in Japan. 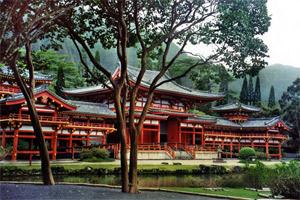 In the middle of February, 12 men and as many women, mostly in their late 30s and early 40s, gathered at Anrakuji, a temple of the Nichiren sect in the city of Wakayama, for a spouse-finding event, with each paying 2,500 yen for participation.

"Please value the chance of meeting each other here even if you don't find a partner," Shunko Yoshino, chief priest of the temple, said as he kicked off the event.

The men introduced themselves for three minutes each at tables occupied by women participants, cheerfully but earnestly talking about their occupations, families and other aspects of themselves.

After the event, which also included making colourful beadrolls and taking tea, participants wrote the names of those they were interested in on cards and submitted them to Yoshino, who chanted a Buddhist sutra, wishing for good matches.

"You have Buddha in yourself and I want you to find Buddha in other people," Yoshino said in his subsequent lay sermon. Buddha meets Buddha' is the theme of this event."Eventually, four couples were matched.

The matchmaking event was launched in 2011 jointly by Yoshino and Ryushin Yasutake, 37, chief priest of Dorakuji, a temple of the Kuze Kannon sect in the town of Katsuragi, Wakayama Prefecture, known as a foster home for children.

Yoshino, 35, and Yasutake got acquainted with each other through a nonprofit organisation aimed at teaching Buddhism to children.

Agreeing on the importance of families, the two priests jointly started the matchmaking event and have conducted it on seven occasions to date, including the latest one in February, at either of their temples. The event brings Buddhism to the fore because it is held at temples, the two stressed.

"Temples should be places for mental growth and I hope (participants) will think they can become happy if they bring Buddhism into their daily lives," Yoshino said.

"For people who found their spouses here, our temples are places they can return to and seek advice from," Yasutake said.

" Matchmaking events conducted by temples of different sects are also drawing attention as a model for revitalising temples.

While matchmaking events are now held at temples in various parts of the country, the move was triggered by Katsuhiko Horiuchi, 34, who heads a group of people interested in temple lodging.