Tokyo, Japan -- Here’s a familiar saying: “In Ancient Egypt, cats were worshipped as gods; they have never forgotten this.” 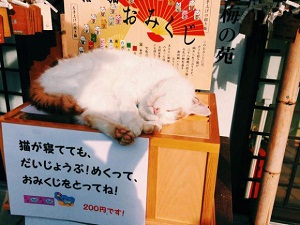 Certainly in Japan, cats are still given a huge amount of respect, with entire islands of moggies being given free roam to peacefully exist in their own little kitty ecosystem.

Of course, things aren’t perfect, and stray and abandoned cats are a sad reality in Japan as much as they are in many other countries. But today we’re here to appreciate the happy cats of Gotanjo temple in Fukui Prefecture, who are lovingly tended to by Buddhist monks and fawned over by the adoring tourists who come to visit.

You can even get a special kitty cat fortune and see what’s in store for the coming year!

Gotanjo Temple is so well-known for its plethora of feline residents, it’s now unofficially been dubbed “Kitty Temple” by visitors and local residents.

The monks feed and care for the cats, who spend their days either lounging around on top of the omikuji (fortune) stands or trotting after the monks hoping for a tidbit.