The Buddhist Monk Who Uses Space to Teach Spirituality

Tokyo, Japan -- In a pitch black room, Ryo Kasuga talks space as a simulated solar system rotates above my head. Kasuga, however, is no astronomer. He’s a Buddhist monk intent on using the stars to rouse the public’s interest in spiritual teachings. 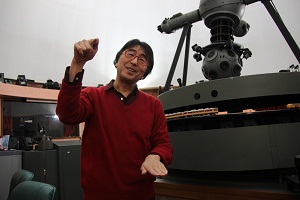 “The Japanese public have little interest in Buddhism. I don’t think that will improve in the next ten years either,” Kasuga, a tall man dressed in jeans and a red jumper, told me as we stood in the small planetarium located next to his temple.

Kasuga’s Gingaza planetarium, established in 1996 and cluttered with plastic dinosaurs, model ships, and photographs of Japanese astronauts, appears out of the ordinary compared to a regular observatory. The tech found in his planetarium is cobbled together via donations from other planetariums who no longer need their equipment.

Kasuga himself looks little like a stereotypical Buddhist monk with shorn head and spiritual robes, but he hails from a generation of monks and heads up the Shoganji Temple, found in a small sleepy town on the outskirts of Tokyo.

For Kasuga, the aim is to expand the public’s interest in both space and Buddhism. The monk prides himself on doing what other planetariums and conservative Buddhist temples do not do: encourage awareness and critical thinking.

There is actually no link between space and Buddhism, asserted Kasuga. The planetarium is instead simply a novel medium through which he attempts to pique the curiosity of people who wouldn’t usually be interested in Buddhism.

As a child, Kasuga aspired to be an astronomer and took every opportunity to visit planetariums in Tokyo and read up on the sciences in his free time. Parallel to his interests in space, he received Buddhist training from the age of four, and was eventually obliged to give up his interest in astronomy and physics for a place at a Buddhist university. Yet, disapproving of how Buddhism was represented in Japan, he soon left the country to go and pursue a musical career in Italy.

“I thought that Buddhism was fascinating, but I didn’t agree with what the monks and Buddhist temples were doing in Japan. To me, it seemed like they didn’t put much effort into teaching what the Buddha had to say, and just took money from their parishioners,” said Kasuga, who noted that this wasn’t exactly the monks fault per se.

Before and during WWII, religion was closely married to politics, inspiring the belief that the Japanese Emperor was a God among the populace. Disturbed by the repercussions of this ideology on the Japanese people, Kasuga explained that the US administration (the Supreme Commander of the Allied Powers, active between 1945-1952) lifted religious instruction from Japanese schools soon after the end of WWII.

The Shinto Directive was introduced in 1945 by the body in order to prohibit the teaching of elements of the Shinto religion in public schools that might produce militaristic and ultra-nationalistic behaviors in the Japanese populace.

According to Kasuga, this actually resulted in today’s religious leaders and the Japanese public having little conception of what religion actually is as a whole.

“People in the US and Europe receive basic education on the Bible. But we don’t even have that in schools in Japan,” he remarked.

While Kasuga was set to stay in Europe, the sudden illness of his father forced him to return to Japan. Upon arriving, his father passed away and Kasuga felt pressurized by his temple’s parishioners to take up his position of 17th head monk of Shoganji temple. “Their funds had supported me as I grew up so I felt obligated to them,” explained Kasuga.

Kasuga accepted the responsibility upon one condition: that he could reform how Buddhism was taught at his temple.

“I wanted to make it easier for people to understand what Buddhism is about. That’s why I built a planetarium,” said Kasuga. “I thought that if people became impressed with the stars, and enjoyed the experience, they’d be more likely to listen to me.”

Once every month, the planetarium is opened to the public so that Kasuga can give a lecture about both the stars and Buddhism. Each session—which is different every month—starts off with an explanation of the constellations and the planets, after which Kasuga switches to explaining some aspect of Buddhism. This month, for example, he spoke of the role of cats in Buddhism and how the monks brought them over to Japan via China in the past.

“The people who come to the planetarium are a bit like the people who go and visit zoos. They like animals, but they haven’t really studied them much,” said Kasuga.