Holy Buddhist temple embraces its role as a Pokémon gym

Kyoto, Japan -- Pokémon fever has taken over the world - it's touched private businesses, Holocaust museums, and now, a Buddhist temple in Kyoto, Japan. 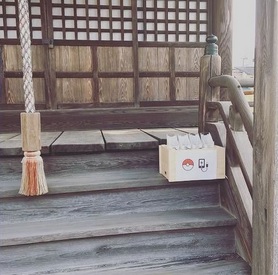 Recently, the temple announced that it would partially transform itself into a Pokémon gym. Level 5 players are now welcome to roam the temple in search of runaway Pokémon. The temple offers free cell phone chargers, available on the temple steps.

The resources provided at the temple are ample. Washrooms and water fountains are provided for interested trainors. The temple provides a safe space for people who want to practice Buddhism, as well as capture Pikachus.

Sure, throwing little balls at imaginary creatures may not seem like a practice that belongs in one of the world's most ancient religions, but the monks don't seem to mind.

Since posting their gym on social media, people all across social media haven given the temple rave reviews.

"There’s real incense here, just like in the game!” one player tweeted, while another added,“Thank you for such a beautiful show of tolerance."

It's unclear how many Pokémon players were discriminated against before the Pokémon Buddhist temple, but the gesture seems nice.

Sure, Buddhism and Pikachus may seems incongruous, but with over 9.5 million daily users, Pokémon Go is catching on. Within just a month of its release, it has already grown into one of the fastest growing religions.

May all people be able to practice, and play, in piece.
TOP