Tokyo, Japan -- A Buddhist governing body has questioned one of the two most senior monks at Zenkoji temple in the city of Nagano about allegations he sexually harassed a female staffer, it said Thursday, with the monk reiterating his denial of the claims. 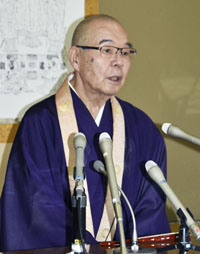 In the hearing conducted in early August and on Wednesday, Gencho Komatsu, 83, denied the accusations as he has repeatedly done in the past, according to his lawyer.

The Tendai sect office, based in Otsu, Shiga Prefecture, conducted the hearing after it received petitions in July by monks of 25 Tendai sect temples under Zenkoji and other followers demanding Komatsu’s resignation over the allegations.

Komatsu allegedly made discriminatory remarks about the woman in her 60s, sexually harassed her and unfairly transferred her to a different division, according to the abbots and followers.

The office said it will decide whether to dismiss Komatsu after investigating the matter but declined to elaborate on what Komatsu said in the hearing.

Komatsu serves as the chief of the Tendai sect group Daikanjin, which manages the temple jointly with the Jodo sect group Daihongan.

Komatsu rejected calls by the monks and followers to step down in June and told reporters the following month the allegations are “completely groundless” and he wants to prove his innocence.

Komatsu serves as “kansu” chief monk of Daikanjin at Zenkoji, which was founded in the seventh century.
TOP