TOKYO, Japan -- Japan is home to more Buddhist temples than convenience stores, but many are struggling to find the parishioners they need to stay afloat. As congregations shrink, thousands of temples are going without resident priests. 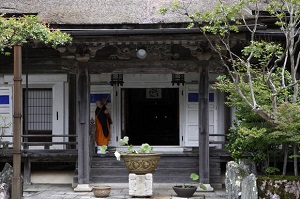 A survey released by the Kyoto Shimbun newspaper this week shows that nearly 13,000 of the approximately 75,000 Buddhist temples in the country do not have resident priests or are co-managed by chief priests from other temples.

The situation is especially dire in rural areas that have seen their populations fall, either naturally or due to migration to cities, a spokesman for the largest sect represented in the poll told the Nikkei Asian Review.

"With rural depopulation, we're seeing many temples lacking enough parishioners to pay for their upkeep," said a spokesman for the Soto sect, the largest of the Zen sects in Japan, which oversees 14,521 temples. Of those, around 22% do not have designated resident priests. Some chief priests, or jyushoku in Japanese, manage up to six or seven small temples.

Some temples, especially those in mountainous regions with dwindling communities, have been abandoned because there are not enough local patrons to finance their activities, the spokesman said.

But high funeral prices -- the fees for ceremonies and related services can run upwards of $20,000 -- have led many secular-minded Japanese to look for cheaper options. This is weighing on the finances of temples already struggling with changing demographics.

The issue has been raised by Buddhist organizations on numerous occasions. Some priests have opened Buddhism-themed bars and cafes to give the religion a hipper image, and to make it more accessible to the masses.

The future, however, looks grim, given Japan's declining population and the ongoing exodus from the countryside to cities.

"The situation hasn't really changed over the past decade," the Soto spokesman said. "We have priests, but there's no point in dispatching them to temples in areas where there's no economic activity."
TOP