Kyoto-based Buddhist group struggles with decline in temples and priests

KYOTO, Japan -- A Kyoto-based Buddhist group with the largest number of followers in Japan is boosting its support to its member temples in other prefectures amid a shortage of incoming chief priests and a decline in danka (financial supporters). 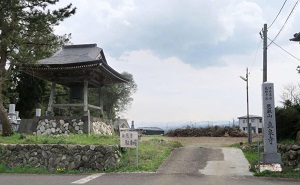 << The main building of a Buddhist temple in the city of Toyama has been pulled down after its organization was dissolved. The Honganji group started offering support to member temples suffering from a shortage of priests and local supporters.

In Toyama Prefecture, a temple of the Honganji sect of Jodo Shinshu, also known in English as “Shin Buddhism,” has been unattended for a long time, with weeds and bamboo growing around the grounds and tiles falling off from the eaves of the main hall.

Following the death of the temples’s chief priest decades ago, another priest took over to take care of the place. But he, too, died around 30 years ago.

“The building has deteriorated, especially in the past two to three years. I’m sure it will collapse if it gets a hole in the roof,” said a 63-year-old neighbor who voluntarily looks after the bamboo grove around the temple.

A local Buddhist monk belonging to the Honganji group voiced difficulty in maintaining the temple.

“We cannot leave the temple as it is, but it would harm the reputation of the group as a whole if it is dissolved forcefully and becomes a cause of friction with followers and locals,” the monk said.

Facing such challenges, the group last year started to dispatch staff to assist member temples in Toyama and the Sanin region. It also plans to send supporters to Ishikawa, Shiga and Hiroshima prefectures as well as to Shikoku this fiscal year.

In June 2014, the group created a booklet titled “Guide to Dissolve Temples” for its member temples nationwide to outline the procedures for terminating a temple and disposing of its properties.

In the booklet, the group explains the procedures and documents needed to file applications with prefectural governments for a dissolution in accordance with the religious corporation law.

It also shows how to decide which temples followers should belong to next as well as ways to secure their consent.

Temples that face dissolution tend to lack the capability to undergo these procedures on their own, as chief priests are either elderly or have died, according to the Honganji group.

The burden of demolition expenses is also heavy, often causing a delay in responding to the problem, the group said.

But if unattended temples remain abandoned, they face the risk of collapse.

The Honganji group also said it needed to create the manual after seeing a case of another group where the religious corporation status of a dormant temple was acquired by a third party and misused for tax evasion.

By region, the southern part of Niigata Prefecture had the biggest decline, of about 5.5 percent, followed by a 4.3 percent fall in Toyama and a 2.8 percent decrease in the Sanin region facing the Sea of Japan.

According to the Cultural Affairs Agency, the number of Buddhist temples with religious corporation status currently stands at just over 77,000. Among them, 2,029 corporations are in a dormant state, indicating that the Honganji group is not the only one placed in a severe situation.

“To maintain temples, revitalizing local areas is essential,” said Yuken Asai, 56, a Honganji staff member who supports the group’s temples in Toyama. “We have no choice but to learn by trial and error from generation to generation by returning to the original role of religion, which is to become the foundation for people to live a vibrant life.”
TOP