Tokyo, Japan -- The words “spiritual” and “spartan” are not often used to describe properties listed on Airbnb. They are, however, more likely to crop up following the launch of a service devoted to providing accommodation in temples across Japan. 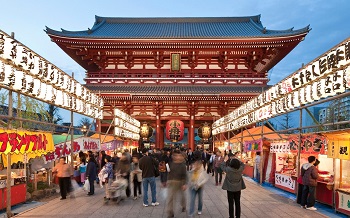 Terahaku aims to become the Airbnb of temples when it starts operating this summer, with the goal of offering visitors the opportunity to sleep overnight in Buddhist establishments.

Until now, a small number of Japanese temples have offered accommodation known as shukubo, typically including a place to sleep and vegetarian Buddhist cuisine, mostly targeting pilgrims or adventurous tourists.

However, Japan’s 77,000 nationwide temples have been restricted by laws from marketing themselves as commercial accommodation, a situation that will change with new legislation relating to residential lodging from June 15.

Terahaku, the brainchild of an Osaka-based tourism company called Waqoo Co, will enable users to book stays in temples at the click of a button, via computers or smartphones.

The company has formed partnerships with Airbnb and Booking.com so users can research listings and make reservations in English, with nightly rates expected to range from around 10,000-20,000 yen (£70-£140).

Around 100 temples will feature on the site when it launches in July - including Mii-dera, a famous Buddhist complex dating back to the seventh century, not far from Kyoto – with plans to boost this to 1,000 in three years.

In addition to offering accommodation, many temples will offer a unique cultural insight into Buddhist life, with some offering guests the chance to try zazen meditation, sutra writing or attend early morning prayers as well as sample Buddhist cuisine.

Terahaku is one of a raft of accommodation innovations that have emerged in Japan in recent years, in response to the nation’s widely reported shortage of beds in the run up to the 2020 Tokyo Olympics.

A record number of tourists are holidaying in Japan, with nearly 28.7 million visiting in 2017 and the government apparently on track to hit its target of 40 million visitors by 2020.

The government is reportedly keen for visitors to tap into alternative forms of accommodation, according to Reuters – including love hotels – in a bid to limit room shortages.

The accommodation website Booking.com has reportedly seen love hotel bookings rise 48 per cent in the past year and expects the trend to continue as the 2019 Rugby World Cup and 2020 Tokyo Olympics approach.
TOP