Kyoto, Japan -- Some 80 Buddhist priests led by Raitei Arima, head priest at Kyoto's Golden Pavilion Temple, or Kinkakuji, left for North Korea on Tuesday to conduct a ceremony with priests there to commemorate the restoration of the famed Ryongtong Temple in the city of Kaesong. 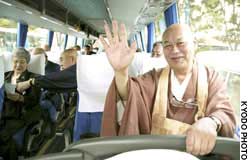 Arima also heads the Shokoku school of the Rinzai Zen sect. According to his delegation, Arima arrived in Beijing on Monday. It will be the first joint Buddhist ceremony performed by priests from the two countries.

The temple, which dates to the Koryo dynasty (918-1392), was restored last October in the city that was once its capital.

Sources close to the delegation said Arima may be delivering messages regarding Japan-North Korea normalization talks, but he denied any political role, saying his trip is only for the sake of performing the ceremony.