TOKYO, Japan -- The Kamiyacho Open Terrace cafe in central Tokyo has all the trappings of a trendy establishment - good coffee, homemade dessert, an airy terrace. 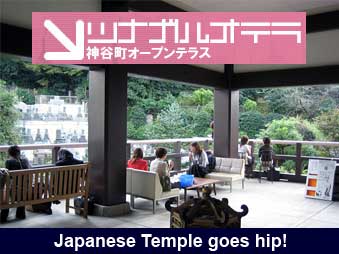 But what makes the cafe truly interesting is its setting: inside the Buddhist Komyoji temple, one of many across Japan offering new services - concerts, discos, yoga classes - in a struggle to stay relevant despite an increasingly secular society.

"For Japanese, temples were once a part of daily life," said 24-year-old owner, and monk, Keisuke Matsumoto. "I want Kamiyacho Open Terrace to be a place people can drop in casually ... and perhaps become a little curious about Buddhism."

The young priest will need patience and optimism. More than a millennium after it first arrived from mainland Asia in the sixth century, Buddhism is in crisis.

About 94 million Japanese were registered as Buddhist in 2005, almost three-quarters of the country's population. But for many, the only time they enter a temple is to attend a funeral - driving many of the country's 75,000 temples to the verge of bankruptcy.

"Some priests can't even put food on the table from their temple-related work," said Takanobu Nakajima, an economics professor at Tokyo's Keio University. "Their congregations are so small the priests take second jobs and still barely manage to scrape by."

So young Buddhists like Matsumoto are trying to turn that around by reaching out to new groups - and employing some clever entrepreneurship.

At Matsumoto's cafe, which overlooks a garden dotted with gravestones, visitors don't pay with money, but with prayer. All the coffee, tea and sweets served by robe-clad monks in the open terrace are free. Instead, the monks - all volunteers from nearby temples - suggest patrons put their hands together in prayer at the temple's grand altar before they leave.

Some temples are branching out in other ways.

The Tsukiji Honganji temple in central Tokyo, for instance, offers theological seminars in English for foreigners, and has fitted its main hall with a pipe organ and conducts Western-style weddings to attract young couples who prefer a white dress and tuxedo to a traditional Buddhist ceremony.

In addition to his cafe, Matsumoto's Komyoji temple offers weekly yoga classes. He also spearheads higan.net, a Web-based movement of young monks who organize festivals, discos and meditation sessions, and write daily blog entries on everything from Buddhist cuisine to music.

For priests who are stumped for ideas, help is increasingly at hand.

Hideo Usui, an editor at Gekkan Butsuji, a Buddhist monthly journal, has launched a Web site offering advice for priests trying to modernize their practices. Recent entries include "Buddhist rites for the modern lifestyle" and "Using the Internet to take funeral orders."

"Priests got so used to easy money, so they didn't make an effort to innovate or to recruit new parish members," Usui said. "Now, that's changing."

Indeed, the money troubles are a major comedown for a Buddhist clergy that in the 1980s was known for its flashy lifestyle.

Awash with cash as Japan's postwar economy boomed, temples once extracted huge donations from their congregations and charged exorbitant sums for lavish funerals - often over 2 million yen, more than $17,000 at today's exchange rate.

But the good times ended when Japan's economic bubble burst in the early 1990s, making elaborate funerals and other extravagances a thing of the past. And while Japan's aging population has meant more funerals, the departed now typically have fewer descendants to share the bill, putting a premium on discount services.

Few Japanese strictly stick to one religion, instead picking and choosing as they please from many. A family might celebrate births at a shrine of the native Shinto religion and weddings at a Christian church, for example. Buddhists have specialized in funerals - which hasn't helped their image.

And Matsumoto's cafe, which opened in 2004, hasn't led to many recruits so far. An office worker who often eats her packed lunch at the cafe said while she was now more interested in the religion, she didn't have immediate plans to join the temple's congregation.

"I hadn't even thought of it," said Sayaka Miura, a marketing assistant at a broadcasting company.

Matsumoto is undaunted. He recently put on a free rock concert at Tsukiji Honganji temple for 1,000 twenty- and thirty-somethings who went wild to the beats of the Zazen Boys before settling down for a Buddhist sermon.

"I want temples to become a part of everyday life again," Matsumoto said. "There's a lot Buddhism can offer modern society. ... It's just a matter of what temples are going to do about it."