Buddhism is a science of the mind: Dalai Lama

MIYAJIMA, Japan -- His Holiness the Dalai Lama said Saturday that Buddhism is a science of the mind. 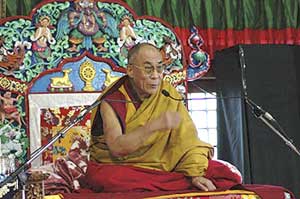 “Buddhism is more than a religion. It is a science of the mind”, he said quoting scholars and experts in his talk on the introduction of Buddha’s teachings to a gathering of some 2,000 devotees at Daishoin Temple in Miyajima Island.

The exile Tibetan leader said a thorough understanding along with proper investigation of Buddhist teachings help in training the mind. He said lasting happiness cannot be attained without inner peace. “And inner peace is possible through mind training, without which happiness, howsoever great, is fleeting and superficial.”

“Spirituality is more than just observing rituals and chanting of mantras routinely. It also requires understanding the teachings in-depth, discipline and practice.”

It is the Dalai Lama’s first day of Buddhist teachings at Daishoin Temple. A concurrent celebration was held to observe the 1200th founding anniversary of the prestigious Temple.

Saturday’s preliminary teachings was attended by Japanese and foreign devotees, including Buddhist monks from Korea, Japan and China. The exile Tibetan monks from Drepung Gomang monastery in India also attended.

The teachings will be held till November 8.