Tokyo, Japan -- Last month's Noto Peninsula Earthquake damaged at least 600 Buddhist temples and Shinto shrines in the Noto region of Ishikawa Prefecture, and destroyed some of their main buildings, it has been learned. 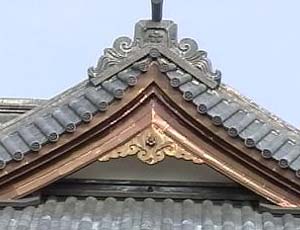 << A temple in the Ishikawa Prefecture

As a result, some festivals have been postponed, prompting calls for urgent repairs to the religious buildings.

Two shrines that are prefecture-designated cultural properties were hit hard by the earthquake.

The five-storied stone pagoda at Hakusan Shrine in Wajima collapsed, and a worship hall at Matsuo Shrine in Shikamachi is now leaning to one side. Both are among the many temples and shrines that have no plans in place for reconstruction.

Many temples and shrines were built in the region partly due to the missionary work of Rennyo, the eighth abbot of the Jodo Shinshu sect of Buddhism, during the Muromachi period (1333-1568). These temples were not just for religious worship, they also served to bring the community together with their festivals.

However, supporters of the temples and shrines who could help restore them also were victims of the earthquake.

"I really can't ask for any assistance [in rebuilding the temples and shrines]," one supporter said.

As well as serving 36 households, the Kozenji temple of the Soto sect of Buddhism in the Monzenmachi area, which had its main temple destroyed, also was used as a meeting place for local residents and occasionally as an election campaign office.

When the rubble of the main temple was cleared away, all that remained was the temple gate.

"The temple was like a community center to us," said local homemaker Akiko Ogawa, 66. "It's going to be harder to get the townsfolk together in one place from now on."

The gateway of the Kushihi Shrine in the area was destroyed and its worship hall is now lopsided. It was forced to postpone a festival that was due to be held Saturday.

It also is doubtful whether the annual Monzenmatsuri festival will take place in July. The festival, which is the largest local event of its kind, involves revelers carrying mikoshi portable shrines several hundred meters to the nearby Sojiji temple of the Soto sect.

"We're not in a position to get the help of supporters. People have all got to do something about their own homes," said chief priest Kazumaro Yotsuyanagi, 59.