Tokyo, Japan -- Monks at the Sensoji Buddhist temple in Tokyo, the city's oldest site of worship, are ditching tradition to the consternation of preservationists. 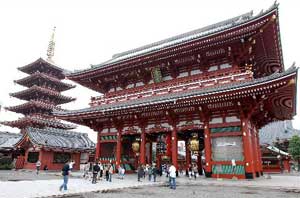 The priests used eight tons of titanium to replace the traditional clay-tile roof on their compound's two-story gate in May. Now they are considering using the lightweight metal, a favorite of aircraft and golf-club makers, to top the main pavilion, says Minoru Shimada, a Sensoji spokesman.

``Clay roof tiles are six times heavier than titanium, so in case of an earthquake, to prevent falling roof tiles hitting tourists, we decided to use titanium,'' Shimada says.

``In restoring national heritage buildings, it is the very first principle to use original materials,'' says Kenichi Murata, a researcher at the agency in Tokyo. ``Using new materials such as titanium lowers the value of cultural assets.''

Buildings protected by the agency may receive public funds for as much as 85 percent of repair bills.

Financial support isn't as important as aesthetic appeal, says Dosho Yotsuya, abbot at the Zuiryuji Buddhist temple, a heritage site in the northwestern city of Takaoka.

Zuiryuji's seven-structure compound, completed around 1660, showcases early Zen architecture from Japan's 1603-1868 Edo period, when the administrative capital shifted to what is now Tokyo from Kyoto. Restored pavilions, arches and carvings illustrate the wealth of the surrounding region, then one of Japan's richest counties.

New metals such as titanium have a peculiar shine that jars the eye when added to traditional structures, Yotsuya says. He renovated Zuiryuji's roof with clay and wooden tiles in 1996.

At the Acropolis in Athens, conservators first used iron rods and clamps to fortify a marble temple built around 400 BC. The iron rusted, staining the marble and accelerating its deterioration, according to Raifah Kabbani, a chemistry professor at Pace University in New York. Conservators switched to rustproof titanium in 1975.

While titanium is more expensive than conventional options, it lasts longer, says Kinoshita, a leading designer and restorer of traditional wooden buildings. The metal also puts less stress on the wood that supports it.

One titanium tile weighs 4.3 kilograms (9.5 pounds), according to Nihon Teppan Corp., a unit of Nippon Steel Corp., the world's second-largest steelmaker. That's half as much as a copper tile and one-sixth the weight of clay.

More than 60 religious structures around the country now sport titanium tiles made by Tokyo-based Nihon Teppan.

``Once they're put up, they don't need to be repaired,'' Kinoshita says. ``The Cultural Affairs Agency says don't use new materials, but the architectural technology for temples came from China and Korea, and temples were a showcase of cutting-edge technology then.''

Sensoji may even replace its roof gargoyles -- the ``oni gawara,'' or tile monsters -- with titanium models, spokesman Shimada says. Legend says the temple, which isn't deemed a heritage site, first rose in the seventh century.

Japan has had plenty of practice restoring its 158,334 Buddhist and Shinto structures. Many, including Sensoji and Zuiryuji, burned down in U.S. fire-bombing raids in World War II.

The country is also one of the world's most earthquake-prone, sitting in a zone where the shifting Eurasian, Philippine and Pacific tectonic plates meet.

Copper tiles are being attacked by acid rain, the result of pollution. Their average lifespan has dropped to as little as 20 years from about 80, says Tomoaki Yamashita, a priest at the Koetsuji Buddhist temple in Kyoto.

Koetsuji was one of the first temples to adopt titanium in 1992. Monks made the change after tests showed the metal lasted longer than copper tiles, Yamashita says.

``I imagined the future of my temple and concluded that renewing the roof every 50 years would be a heavy burden,'' he says. ``We haven't received complaints from worshippers. In fact, we've been getting inquiries from other temples.''