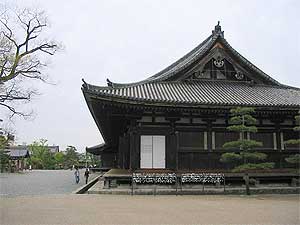 Higashiyama Police Station is investigating the case on suspicion of property destruction.

About 8 a.m., a temple employee noticed the paint splotches on the hall's Kitamon and Todaimon gates.

According to the police, a section about 1.5 meters by 1 meter on the Kitamon gate and one about 1.4 meters by 3 meters on the Todaimon gate were defaced with the paint, which seems to have been thrown from a container.

"We've never experienced such a terrible prank. We're very upset about it," a spokesman for the hall said.