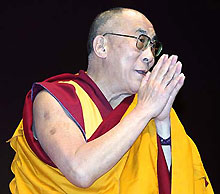 << His Holiness the Dalai Lama greets audience upon his arrival at the All Japan Buddhist Conference in the National Conventional Hall of Yokohama, 20 November 2007. Click here for more photos. (Photo by Tenzin Dasel/Phayul.com)

Mainly relying on his own experience and from the lessons of the Buddhist Tibetan tradition, The Tibetan spiritual leader spoke on how to create a more peaceful world by reducing gap between human perception and realities in today’s world.

His Holiness blamed many of the world’s man-made problems and crisis to lack of “realistic approach”.

Pointing out at the problem of “more mental and emotional crisis among younger generation” and increasing global “environmental damages”, His Holiness told the Buddhist conference that “these problems which we are facing are creation of human beings themselves – in some cases (through) mistakes, some cases – negligence, and also some cases out of ignorance”.

“The gap between human perception and today’s reality should be reduced. There should be less and less gap between these two for a more sensible approach to reduce many problems,” His Holiness insisted.

The Tibetan spiritual leader also did not approve the wide gap between the rich and poor, which he says “exists even in developed nations like United States and Japan”. “That is not only morally wrong … practically also there are problems” he added.

His Holiness also called for incorporation of moral lessons in today’s educational system. “Modern education pays more and sufficient attention on brain development only and less or no attention on moral values. I think that is a mistake,” the Dalai Lama said.

On the question of “whether the world with six billion people (are) going towards doomsday,” the Dalai Lama said, “It depends entirely on our mental attitude, hope, vision, and our efforts.” Taking the example of Japan, the Dalai Lama said the people of the country “did not give up” after the World War II crisis. “With more hope and determination, Japan is now strong and very much advanced,” the Dalai Lama said.

“Because of negative events and negative developments, if we lose our hope and self-confidence, and remain pessimist, then we will not develop,” the 1989 Nobel Peace Prize laureate told the crowd.

Describing himself as a “simple Buddhist monk”, the Dalai Lama said promotion of human values and religious harmony are two of his main commitments in life. He, however said, Buddhist concept of interdependency is worth an attention for non-Buddhists and, both believer and non believer of religion. Since the concept is based on reasoning, the Dalai Lama said the concept “can be very much relevant in this 21st century”. Because of its scientific implications, the Dalai Lama also opined that it could be even more useful for non-believers and scientists.

To the Japanese Buddhists, the Dalai Lama demanded more serious practice of the Buddha Dharma. For followers of other faiths, he said there was no need of religious conversion to understand the concept of another religion.

The President of the All Japanese Buddhist Federation and Yokohama City Mayor were among those dignitaries at the Buddhist Conference in the shell-shaped hall, which is one the largest in the world.

After the conference, the Dalai Lama interacted briefly with Mongolian community in Japan at the latter’s request.

The Tibetan leader is currently on a 9-day Japan tour beginning November 15.

Although he was well received by the religious groups, the Japanese government officials have avoided contact with the exiled Tibetan leader in an obvious effort not to irk China. But the popularity that the Dalai Lama enjoys in Japan, with its considerable Buddhist population, enabled the organisers of the Tuesday’s conference to sell out 5000 tickets within hours.

The Dalai Lama earlier described his current visit as part of his effort to promote human values and religious harmony. On Sunday he paid visit of the nation’s most sacred Shinto shrine and participated in an Interfaith Forum at Kogakkan University in Western Japan’s Ise City, Mie Prefecture.

While in Yokohama, His Holiness is expected to give lectures in two private schools and visit a Shingon Buddhist temple in Tokyo's Bunkyo-ku before leaving for India on November 23.