Nagano, Japan -- A famous Buddhist temple in Japan has been withdrawn from the Olympic flame relay over security concerns and anger at China's crackdown on Tibetans. 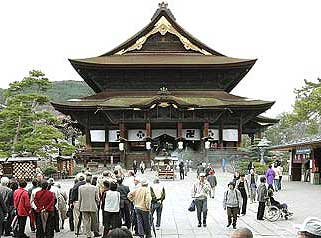 The Zenkoji temple in the city of Nagano said it had received 1,000 letters from across Japan calling for it to withdraw from the April 26 procession after the crackdown in predominantly Buddhist Tibet, where monasteries were raided and monks arrested.

The temple was due to be the starting point of the flame's passage through Japan, taking runners through the city for 11.5 miles (18.5km).

A city official, Koichi Yajima, said the monks were concerned about the safety of the temple and its worshippers should the relay spark the kind of angry demonstrations witnessed so far in Europe and the United States.

An official at the temple's secretariat said the monks and worshippers were also concerned about the treatment of fellow Buddhists in Tibet.

"There has been a lot of talk about the Tibet issue and the public opinion is heightening," she said. "We are Buddhists just like them. We hear words of concern from many people every day."

Nagano, the host of the 1998 Winter Olympics, has already cancelled a post-relay event because of security concerns.

Since it began on March 24 in Greece, the torch relay has been a magnet for critics of China's policies in Tibet and for human rights activists. Protesters disrupted stops in London, Paris and San Francisco.

Yesterday, the spectacle of the Olympic flame travelling through New Delhi was the oddest leg of the relay so far. India is home to the world's largest Tibetan community in exile and the government deployed 15,000 police to keep protesters away from the flame, with the effect that the torch had few spectators.

The flame is currently in Thailand and will pass through Malaysia and Indonesia before reaching Australia, where further protests are anticipated. From there it will go to Japan, South Korea, North Korea and Vietnam before reaching China.