Nagano, Japan -- Graffiti were found on the main building of Zenkoji temple in Nagano on Sunday morning, two days after the temple decided not to serve as the starting point of the Beijing Olympic torch relay, which starts Saturday. 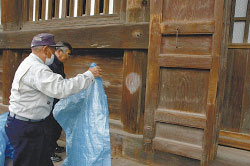 << Temple officials cover graffiti sprayed on the pillars of the main building of Zenkoji temple.

The police, who suspect somebody targeted Zenkoji due to the temple's recent high profile as a result of the torch relay issue, are investigating the case on suspicion of damaging buildings and a violation of the Cultural Properties Protection Law.

A temple official found the graffiti on pillars and doors of the main building, which is a designated national treasure, at about 5:40 a.m., and reported the incident to police.

Six white ellipses up to 80 centimeters in diameter were found on a door and five pillars standing along the corridors running on the northern and western sides of the main building, and a 1.3-meter-long, 5-centimeter-wide line was found on another door on the building's north side, according to the temple. All the graffiti apparently were done with spray paint. Though the front and the northeast side of the main building are illuminated at night, there is no such lighting on the northwest side.

According to the temple, its night duty officials did not see any graffiti when patrolling at about 11 p.m. Saturday. In the neighboring Joyama Park, where people were viewing cherry blossoms late into the night, police officers patrolling until about 2 a.m. Sunday reportedly saw nobody in the vicinity around that time. The temple precincts are open to the public around the clock. Visitors are allowed to walk the corridors, which are about three meters high.

Since the temple on Friday told the Nagano city organizing committee for the torch relay that it had decided to refuse to serve as the starting point of the torch relay, it received about 200 calls in two days. Most of them backed the temple's decision, while several were against it, according to the temple. But there was no threatening calls, it said.

The torch committee will decide the new course for the torch relay and announce it Monday. The committee is expected to designate the workers' welfare center, about 500 meters west of the street leading to Zenkoji, as the new starting point.