Kamakura, Japan -- Kamakura is no place for the weak-kneed. We clambered up muddy forest paths and climbed a thousand temple steps. Then when my Japanese hosts Takashi and Ayumi suggested we go somewhere and sit down, I thought they meant on a chair. I didn't realise we'd be on the floor, folded like origami frogs. But the trip was well worth the physiotherapy bill. 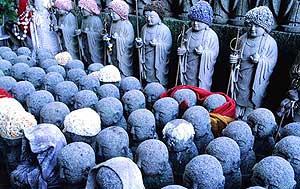 The small town of Kamakura, 50 kilometres south of Tokyo, was the Japanese capital from 1185 to 1333. Now it's a popular day-excursion destination for Tokyo residents and tourists needing a break from karaoke bars and department stores. Kamakura promises temples, forests, hiking trails, craft shops and a view of Mount Fuji from the beach.

The train ride takes just under an hour from central Tokyo. It was Sunday, so we shared our compartment with a large proportion of Tokyo's working population, and hung on straps until many of them disembarked at Yokohama, presumably to go shopping for car tyres.

It was a relief to step onto the platform at Kita-Kamakura, just north of the main town centre. Here were trees, here were hills and the air was fresh.

There were plenty of temples to choose from, but we started with Engakuji, one of the five Zen Buddhist temples in the area. It was founded in 1282, honouring soldiers who fought off a Mongol invasion, but the buildings are not nearly so old, having been replaced and renovated through the centuries.

Engakuji has two national treasures: the great temple bell and the Shariden shrine, reputed to contain one of Buddha's teeth. We could see the lovely shrine through the gate, but it's closed to the public most of the year, so don't ask me how well the Buddha had been flossing.

Other shrines were open however, and their gardens were lovely, even in the non-cherry blossom season. Under the maple trees, groundsmen had carefully raked the pebble ponds into ripples around standing stones, and fat carp in the ornamental lake begged for food.

Foreigners tried hard to follow local customs. In the teahouse, an American visitor was getting a serious lesson in tea ceremony etiquette. Two large Western women bowed low before a shrine. Most Japanese visitors seemed less concerned with tradition, and were busily photographing each other with their mobile phones.

The direct road to downtown Kamakura was crowded, so we set off along a steep trail leading up into the woods, following English signposts towards the Great Buddha.

Take my advice: don't wear your stiletto heels to Kamakura. They seemed to be compulsory for many women, who bravely picked their way along the hiking path, looking very chic, but only when they could stand upright.

After half an hour we came to a short tunnel, leading through rock to the Zeniarai (coin washing) Benten Shrine. They say money dipped in the shrine's spring water will double, so we eagerly put it to the test.

We tried to do it right. We bought candles and incense sticks. Dutifully we lit them, rang the temple bell, bowed, clapped our hands, and respectfully asked to be made rich. Next we paid another modest sum to rent baskets in which to place our money, then with the faithful and the hopeful we laundered banknotes in the spring.

I thought of washing my Visa card to see if my credit limit would double, but lost my nerve. The card had already been rejected by several ATMs and moistening it would be courting disaster.

Beside the spring, a sign in Japanese included just two English words: DRIES NATURALLY. Takashi translated the rest of the message for me: Warning visitors should not dry money over candles. Doubtless there'd been unfortunate incidents in the past.

The rain started and showed no sign of drying naturally, so we dipped into our baskets and used our soggy notes at the souvenir shop to buy umbrellas. My cash had now been halved, while the temple's money had doubled during our visit.

Then it was on to the Great Buddha, the best-known symbol of Kamakura. The building that originally housed it was washed away in a tsunami, so now the Buddha sits exposed to the elements, his serene face hovering nearly 15 metres above our worldly worries.

The statue is hollow, so for yet another of those small fees, Ayumi and I joined those filing through the back door. The inside of a big metal Buddha resembles the inside of a big metal water tank; it's interesting if you enjoy looking at welding. More fun were the temple shops selling Great Buddha-shaped lollies. I like a religion that can laugh at itself sometimes.

We headed back into town to look for a place to eat. The road was lined with restaurants, only recognisable as eating-houses by the pictures of their food on placards outside. Takashi and Ayumi chose a traditional vegetarian establishment, and it was beautiful. But I must have blanched at the sight of the low tables, because our waitress immediately bowed and, in English considerably better than my Japanese (which doesn't extend much beyond konichiwa, sushi and Pokemon), offered me a chair.

I was too embarrassed to accept, since other diners looked comfortable sitting cross-legged on cushions. But my clumsy western legs left an awkward chasm between table and mouth, through which soft tofu could slither off my chopsticks into my lap. A great pity, because the food was wonderful and nothing should have been wasted.

The Japanese taste in design always surprises me. In this restaurant the emphasis was on muted colours, sage green walls and straw cushions, with bare wooden tables and red lacquer bowls. Everything understated, nothing out of place. Yet outside in the street the neon signs were garish and the shops full of kitsch Hello Kitty merchandise.

As darkness fell we climbed one last flight of steps to the main Hachimangu shrine, to watch the stars prick out over Kamakura. The crowds had thinned so we were almost alone. There was nothing but peace and quiet, such a change from the throbbing streets of Tokyo. What an excellent day!

Getting there Qantas economy flights to Tokyo start from $1490 return. Trains from central Tokyo to Kamakura cost Y890 ($8.50) each way.