UJI, Kyoto (Japan) ---The deep-rooted influence of Chinese culture is easily spotted in contemporary Japan, but perhaps most obviously in the nation's food culture. Manpukuji temple, founded here by a Chinese monk in the 17th century, played an essential role in the spread of Chinese cuisine across the nation. 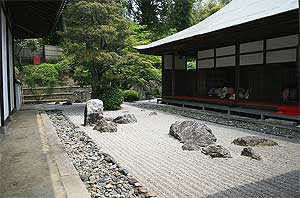 Zen-style calligraphy and portraiture techniques introduced from China by the temple's monks and devotees were highly regarded by Japan's cultural elite at the time, but none equalled the impact of fucha ryori, the Chinese-style Buddhist vegetarian cuisine. Indeed, its impact is still keenly felt today.

"The cuisine has had an unequalled effect on the development of Kansai's food culture," says Chisei Tanaka, a priest and chief researcher at the temple's Obaku Cultural Research Institute. "It brought new ingredients and combined boiling, grilling and steaming procedures."

"[After the founding of Manpukuji temple] the nation experienced a major boom in fucha ryori--much more exuberant than what you see for French or Italian food now," Tanaka says.

Fucha ryori cuisine was also credited with popularizing techniques in deep-frying and stir-frying, which used large amounts of oil, then a luxury item. Its innovative style of dining using tables and Chinese tableware with an elaborate presentation was popular among the general public and feudal lords alike.

Manpukuji temple was established in 1661 by the Chinese monk Yinyuan Longqi (1592-1673), known as Ingen Ryuki in Japanese. He would later be recognized as the founder of Obaku, the last of the three Japanese Zen sects to be founded (the others are the Rinzai and Soto sects), and the first to be based on the teachings of a Chinese monk.

Ingen was well known in Japan before his arrival in the nation in 1654 at the age of 63, thanks to his many Zen-related writings, says Korei Okada, the current head priest of Manpukuji temple, which is still the Obaku sect's headquarters.

"Many Japanese monks rushed to see him after his arrival in Nagasaki [the only gateway from China at the time]," Okada says. "China was regarded as a cultured nation in what was a period of isolation for Japan, and his arrival caused an Obaku boom."

Ingen was accompanied to Nagasaki by Chinese disciples and artisans, including architects, sculptors, tailors and tofu makers. He also brought several foods that had never before been seen in Japan, such as kidney beans, watermelons and renkon (lotus root). The beans, used widely today, are called ingenmame in his honor.

His sermons at Nagasaki temples attracted crowds of monks as well as lay people and were received as a breath of fresh air by those disillusioned with the state of Buddhism in the nation. According to Okada, Japanese Buddhism circles were in disarray following a period of war, with gambling and other inappropriate behavior often being spotted at temples.

"Ingen, who strictly observed commandments prohibiting marriage and eating meat, was considered an ideal priest for Japanese monks to learn from, and many people visited him in Nagasaki, either to become his disciples or to meditate with him," Okada says.

Ingen was scheduled to return to China after three years, but extravagant efforts by his followers persuaded him to stay in Japan. He was introduced to the 4th shogun, Tokugawa Ietsuna (1641-1680), in 1658 and given land in Uji to build a Zen temple.

Ingen named the temple Manpukuji, which is written using the Chinese characters for "man" and "fuku," respectively meaning "ten thousand" and "fortune," just like Wanfu Temple in Fujian Province, where he had served as head priest before he left for Japan.

The foundation of the temple boosted Ingen's influence significantly, and many highly educated Chinese monks followed him to Japan to serve at Manpukuji temple and elsewhere. The Obaku sect was widely embraced, and at its peak had about 1,000 temples, creating a powerful base for promoting aspects of Chinese culture.

Most acclaimed of these was the original taste and exotic presentation of fucha ryori. In the Edo period (1603-1867), its popularity spread quickly, boosted by the publication of many cookbooks about the cuisine, and was entrenched by the opening of fucha ryori restaurants in Nagasaki, Osaka, Kyoto and Edo, present-day Tokyo.

"I believe people who were served fucha ryori at special events at that time must have sung its praises far and wide for its reputation to have been so widespread," Okada says.

Visitors to Manpukuji today also enjoy many other elements of Chinese culture the temple community helped to popularize and an atmosphere that has remained unchanged for about 350 years.

The close attention Ingen paid to reproducing the atmosphere of Chinese temples when overseeing the construction of Manpukuji is striking. The temple's three main halls stand lengthwise, perfectly aligned, with other buildings opposite them creating a powerful sense of symmetry, a layout typical of Chinese Zen Buddhist temples built during the Ming dynasty (1368-1644).

Most of the main buildings are remarkably well-preserved, having maintained their original structure since their construction in the 1660s.

Entering the temple through Sanmon gate--which still boasts original nameplates of the temple and the mountain, inscribed by Ingen himself--visitors walk a path of diamond-shaped stones toward the main attractions.

Dozens of Buddhist statues showcase the excellent craftsmanship of the Ming dynasty, the most famous of which is the wooden statue of Hotei, god of fortune, at Tennoden hall. About 110 centimeters tall and covered in gold leaf, it is a popular symbol of the temple and often appears on the cover of sightseeing magazines.

A 230-centimeter-long, fish-shaped gong hanging from the ceiling of Saido dining hall is struck by a monk with a wooden pole to announce daily events and rituals.

In the Hozoin temple, a collection of 60,000 printing blocks inscribed with more than 6,900 volumes of sutras is piled high on shelves. The blocks were made in a major project launched by Tetsugen Doko (1630-1682), one of Ingen's Japanese disciples, and feature the Ming typeface that even today remains the nation's most common typeface, seen everywhere in newspapers and books. The sutras are individually printed even now.

The temple's fascinating tours attract plenty of visitors, and many seize the opportunity to enjoy the experience of beautifully arranged, delicious and nutritious fucha ryori.

Fucha ryori was originally served to all the monks who gathered at meetings after major Buddhist rituals or services were completed.

During the rituals or services, five-colored vegetables, most often carrot, cucumber and Japanese radish, as well as deep-fried tofu, dried kelp, and manju sweet bean paste buns are offered to Buddhist altars or mortuary tablets. The foods bound with palm leaves and stood upright on stands are cooked and served to monks after the events end.

Multiple dishes--a typical fucha ryori meal nowadays includes six or seven--are arranged on large communal plates for four diners, who serve themselves with their own chopsticks.

That no scrap of food is wasted is a fundamental teaching clearly reflected in fucha ryori. Scraps of vegetables can be sauteed to make unpen, which has a thick sauce. Dried-out manju are deep-fried and served as tomoe manju.

Gisho Ienaga, the tenzo monk who supervises culinary operations at the temple, says: "We try to meet diners' expectations of Kyoto cuisine. We serve a variety of dishes that are meticulously prepared and decorated with color and sophistication."

Seafood and meat products are of course prohibited, but some dishes are prepared to represent them symbolically. For example, tofu with grated burdock and yam can be shaped and colored with seaweed so it resembles broiled eel.

Kanken Kiyozumi, a priest who assists Ienaga, explains the delicate nature of the fucha ryori cooking process through the example of a sesame tofu dish made with nutritious kudzu starch.

"It's really difficult to make, because kudzu hardens easily and burns. I have to stir the mixture of sesame paste and kudzu constantly in a pot for about 20 minutes, until it hardens.

"The taste of the dish differs completely from day to day," Kiyozumi says. "Even when I think I've made it perfectly, I can feel the consistency is different when I cut it, so I've never been satisfied with the tofu I've made."

Fucha ryori meals are offered by reservation at Manpukuji temple's Oryokaku hall for 5,250 yen and 7,350 yen, depending on the number of dishes. A lunch box option is also available for 3,150 yen.

Manpukuji temple is about a five-minute walk from JR or Keihan Obaku stations.