To Buddhist devotees around the world, the Royal Grand Hall of Buddhism in Hyogo, Japan, is their Pure Land on Earth.

Hyogo, Japan -- NESTLED in a valley in Kato City, Hyogo, Japan, the Royal Grand Hall of Buddhism, an architectural splendour, was introduced to the world at an inaugural ceremony on Nov 1. 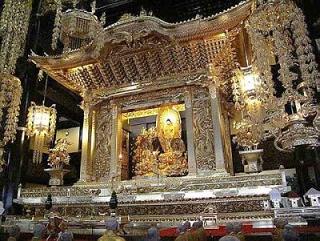 << The Golden Shrine in the Main Hall of the Royal Grand Hall of Buddhism. – Pic courtesy of Dr Anil Sakya of Mahamakut Buddhist University, Bangkok

Touted as the largest Buddhist temple edifice in the world, the magnificent temple of traditional architecture was built after nearly half a century of endeavour.

State-of-the-art technology and traditional craftsmanship were enlisted in this massive project. Some 3.5 million workers – comprising architects, engineers and skilled craftsmen – from South Korea and China took seven years to complete the grand temple, built on a sprawling 148ha site.

The project was borne out of the vision of Dr Kyuse Enshinjoh, 82, founder priest of the Nenbutsushu Buddhist sect (one of 60 Buddhist sects) in Japan and president of the Buddhist Summit.

He dreamt of building a majestic temple, following his first pilgrimage to India to present over 800 rolls of sutras for dedication to the Buddhist temples there.

Enshinjoh was saddened by the dilapidated state of eight holy places in India, some overgrown with grass, others in a state of near ruin.

He was inspired to set up a temple which would serve as the spiritual centre for the 370 million Buddhists in the world.

Enshinjoh’s dream became a reality with the successful completion of the Royal Grand Hall of Buddhism, built at a cost of 60 billion yen (RM2.28bil).

“Such a grand-scale Buddhist temple has never been built in the history of Japan since the erection of the main temple of Obakushu Buddhist sect in Kyoto 350 years ago,” said Shinku Miyagawa, high priest of the Nenbutsushu sect.

Over 300 foreign guests, including Buddhist leaders and devotees from 32 countries, and 12,000 members of Japan’s Nenbutsushu Buddhist sect were at the inaugural ceremony.

The Malaysian delegation of five was led by the Chief High Priest of Malaysia and chief monk of Buddhist Maha Vihara in Brickfields, Kuala Lumpur, K. Sri Dhammaratana. For six days, our delegation stayed at the four-star Okura Kobe hotel, a one-and-a-half hours’ drive from the temple. 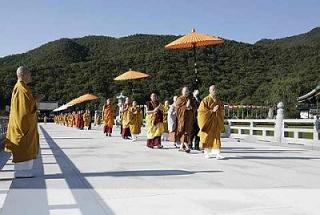 << March of monks during the inauguration of the Royal Grand Hall of Buddhism in Japan. – Pic courtesy of Nenbutsushu Buddhist Sect of Japan

Transport Minister Datuk Seri Ong Tee Keat flew in from France after a working trip and attended the opening ceremony of the 5th Buddhist Summit (Nov 2 to 5) held at the International Buddhist Conference Hall in the temple grounds.

I felt humbled to be part of this historic moment. The 11-day trip to attend the inauguration of the temple, the Buddhist Summit and a study tour of Hiroshima and Nagasaki was sponsored by the Buddhist Summit. All guests from abroad were accorded royal treatment.

I had never felt like a VIP before. Imagine being transported everywhere in a convoy of luxury cars, walking on the red carpet, and arriving to cheers from a welcoming reception of Nenbutsushu members waving miniature flags of the participant countries. It was sheer euphoria.

Steeped in religious rituals, the inauguration ceremony began at 9am. The highlight was the 800m march of the monks from the temple’s main gate up a flight of 300 steps leading to the Royal Grand Hall of Buddhism perched atop a slope.

Guests and dignitaries were driven in cars to the top where we waited inside the temple for the monks to arrive.

The Buddhist leaders, shielded by red, white and yellow umbrellas, were accompanied by Nenbutsushu monks as they made their red-carpet ascent.

After the monks reached the top and took their seats, the sect’s monks in mustard-coloured robes made their grand entrance and proceeded with the rituals, which included the sprinkling of holy water and chanting of Buddhist sutras in the one-and-a-half hour ceremony.

As we made our exit, we were touched by the sight of thousands of sect members sitting in the open, enduring the scorching mid-day sun to follow the inauguration rituals on a big screen.

In the afternoon, we attended the purifying ceremony of the proposed Nalanda Monastery on a 66ha site within the temple grounds. The ceremony was commemorated by the planting of trees by Buddhist leaders and dignitaries. The monastery is to be completed in four years’ time.

We also attended the inauguration ceremony of the sect’s Hiroshima Betsuin Temple (Hiroshima) and the Reliquary Hall of Kyushu Honzan Temple (Kyushu), and visited the Buddhist Summit headquarters at Kobe Betsuin Temple (Kobe) over the next few days.

As we rounded up our tour of the temples, images of the splendour of the Royal Grand Hall of Buddhism kept flitting through my mind.

Even days after my return from Japan, I am still under the spell of this faraway paradise that offers a glimpse of Utopia.