Nara, Japan -- Japan’s Kofukuji and Kasuga Taisha temples are renowned for age-old ‘noh’ performances which have continued to take place almost uninterrupted for over 1,000 years. 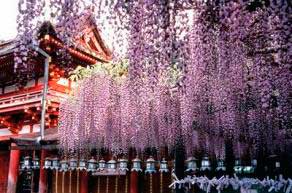 The best known physical features of Kofukuji temple in Nara are its landmark 5-storey pagoda and statue of the deity Ashura. However, the temple also has enormous cultural significance as a home of the traditional stage art noh-gaku.

Noh-gaku comprises noh, a solemn genre in which masked performers engage in song, dance and dramatic plays, and its comical counterpart kyogen, which is often performed between noh pieces. Both forms were listed by Unesco as Intangible Cultural Heritage in 2001.

Kofukuji hosts two major annual noh events—Takigi O-noh in May and Toei-Noh in October. Both are held outdoors at night. The temple first staged noh in a torch-lit setting in the 9th century, and the technique is now widely employed in venues across the nation.

“The performances contained many mystical elements in the earliest days because they were performed by Buddhist priests to thank Buddha and ward off evil,” said Eishun Moriya, a senior priest at the temple.

“Gradually, the spectrum broadened to include more entertaining elements,” he said. “Noh plays during Buddhist rituals came to be performed by professionals, and the spectacle’s reputation spread among nobles and others.

"Noh performances were offered to Buddha and Shinto deities, and people were just allowed to observe."

“These performers received handsome benefits from the elite administrators because their enrichment of the temple’s rituals was so highly valued. The enormous influence of Kofukuji and its associated artists on noh’s centuries-long evolution as an art form is universally recognised among noh followers.”

In the mid-14th century, noh was dominated by humorous and entertaining plays known as sarugaku or sangaku. Two key innovators credited with elevating the form with subtlety and profundity are Kanami (1333-1384) and his son, Zeami (ca 1363-ca 1443), both of whom had close ties to the temple.

Kanami performed a play with Zeami and the sarugaku troupe they belonged to for the third Ashikaga Shogun, Ashikaga Yoshimitsu. The shogun was impressed by the play’s new elements, and went on to give considerable support to Zeami for years to come.

Zeami grew up to become a brilliant actor and playwright who further refined and stylised the noh form, helping it toward the elegant stage art of today. He diversified the form by introducing classical literary and historical references to sit alongside the Buddhist and Shintoistic elements.

Zeami’s innovations led to the development of ever more diverse genres, including shura-mono, historical fictions that often revolve around the tormented ghosts of actual warlords.

One such piece, written by Zeami’s eldest son, is titled ‘Shigehira’ after Taira no Shigehira, a high-ranking court official from the Heian period (794-1192) who burned down Kofukuji, nearby Todaiji temple and other temples in the area in 1180. It tells how Shigehira’s ghost was in torment over his attack on the temples. In life he had been a Buddhist, but his father had ordered him to attack the temples, and he did so out of devotion.

“Helping tormented souls achieve peace (is a Buddhist and Shintoistic idea) and has been a major subject of interest for the Japanese since ancient times,” religious scholar Tetsuo Yamaori said.

“Noh represents the synthesis of Buddhism and Shinto. If even one of those two elements were removed, the art form wouldn’t have survived,” Yamaori said. “Noh plays have long impressed people because they describe humanity’s relationship with the dead and the world of death.”

Unlike other stage arts, noh audiences are not supposed to applaud at the beginning or during a performance, and sometimes not even at the end.

“That’s the way it should be considering its origin. Noh performances were offered to Buddha and Shinto deities, and people were just allowed to observe,” Yamaori said. “You should keep quiet until the last performer leaves the stage. It’s proper to show respect to Buddha and the deities.”

Although Kofukuji’s record of hosting noh events has continued almost uninterrupted for over 1,000 years, the history of its buildings and location has seen more change.

According to the temple’s archives, the forerunner of today’s Kofukuji was built in Kyoto’s Yamashina area in 669, before being relocated to Nara in 710. Sometime between the 10th and 12th centuries, the temple integrated with nearby Kasuga Shrine, and the new entity became known as Kasuga-sha Kofukuji.

From that time, the temple staged noh every year without exception until 1870, two years after the central government issued an edict of separation that prohibited Shinto and Buddhist worship on the same premises. The order resulted in Kasuga-sha Kofukuji being divided in two, with the resulting entities being known as Kofukuji temple and Kasuga Taisha grand shrine.

In 1871, the government condemned the Buddhist-centered Kofukuji temple site, and it was not allowed to reopen until 1881.
In 1952, an annual noh event resumed at both Kofukuji and Kasuga Taisha grand shrine.

Noh aside, Kofukuji is also known for its beautiful buildings, although none of its original structures survive today, having been destroyed in a series of fires over the centuries. The original structures were built according to specific requests from members of the imperial family and also the Fujiwara family, which virtually ruled the nation for centuries.

The original version of the temple’s iconic 50.8m, 5-storey pagoda, for example, is said to have been built in the year 730 by the order of Empress Komyo. The pagoda is now a national treasure.

A temple usually has only one pagoda, but Kofukuji is said to have had as many as about 10 in its precinct at one time. Today it has two, the other being a 19m, 3-storey pagoda originally built in 1143 that is also a national treasure.

Despite the many fires that ravaged the temple’s buildings, some of its precious statues have survived, including 17 sets of statues that are designated as national treasures.

The most popular is a 1.5m-tall statue of the deity Ashura, usually displayed at the temple’s Kokuhokan national treasure hall. The statue was made in 734.

Ashura is depicted with six hands—two joined in prayer, the rest raised aloft—and three feminine faces. Yamaori commented on the melancholic expression of the central face: “It’s angry but subdued. The anger seems to be overwhelmed by sadness. Noh masks have similar double expressions.”
TOP