A younger generation works to restore temples in Shiga Prefecture

Tokyo, Japan -- Tourists might be attracted by Japanese temples and their gardens, but have you ever thought what it takes to preserve their timeless beauty? 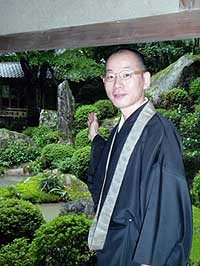 << Green fingers: After over 20 years of neglect, Kyorinbo Temple and its garden (top) have been painstakingly restored by chief priest Koshin Hirobe (above). CHIHO IUCHI

Recent encounters in Shiga Prefecture certainly brought home to me the enormous effort required to pass age-old traditions down through generations.

The history of Omi Province (now Shiga Prefecture), which boasts the huge Lake Biwa, goes back to ancient times. But nowadays, as you race through it on a bullet train between Nagoya and Kyoto, its gentle hills and vistas of paddy fields may barely give you pause for thought.

This time, though, I changed from the Nozomi Super Express to the Kodama Express at Nagoya and, at Maibara Station in Shiga Prefecture, changed again to the local Biwako Line to launch me on my voyage of discovery.

Eastern Omi Province, through which the small train meanders, is dotted with temples and shrines, including Chomeiji Temple and Kannonshoji Temple, which are part of the Saigoku Sanjusan-kasho (the 33 Buddhist temples of the traditional, self-purifying Kansai Kannon Pilgrimage). Attracted by the modesty of the temples, sitting as they do atop low mountains or nestled in remote villages, the renowned essayist Masako Shirasu (1910-98) penned several books, including "Kakurezato" ("Hidden Villages") (1972), "Saigoku Junrei" ("Kansai Pilgrimage") (1974) and "Omi Sangasho" ("Omi Landscapes") (1974), in which she brought the history and culture of Omi Province alive.

In "Kakurezato," Shirasu writes about the rock garden at Kyorinbo Temple in the town of Azuchi, saying: "I was interested in the rock garden, which was made in the Keicho Period (1596-1615). Looking carefully, I noticed that the garden had been constructed on an ancient tomb. Its huge cap stone was quite naturally used as a garden rock, which made me feel like investigating the origin of Japanese gardens."

It was raining on the morning I arrived, and I followed a path that wove through a bamboo grove and took me to a small wooden entrance gate to the temple. Kyorinbo Temple was established by Prince Shotoku in 605, and is much older than Azuchi-jo Castle, which was built by the notorious warlord Oda Nobunaga (1534-82). The misty rain made the vistas even more impressive, and I recalled the amazing story about the restoration of the temple, which I had heard the previous day.

"I was born into a temple family in the neighborhood of Kyorinbo," he said. "When Masako Shirasu visited in 1969, the widow of the former priest lived in the temple alone and took care of it. The temple was open only by appointment. I remember the widow being such a strict old woman, and us naughty kids in the village were scared of her.

"After the widow died, nobody lived there. The temple was closed and soon fell into ruin. The village people called it the 'haunted temple.' No one visited it. As a native of the area, my heart ached over this situation."

After working for the Tendai Buddhist office for several years, Hirobe became the chief priest of the Kyorinbo temple at the age of 26.

"The garden was full of bamboo, the leaky roof was covered with blue plastic sheeting, the floors were giving way. It was not in a habitable condition," he said.

Hirobe decided to restore the temple, and went from door to door in the neighborhood to collect contributions. However, carpenters and craftsmen told him that the temple was beyond repair, and the only option was to build a new one. But that would have cost almost ¥100 million — and even if he could have raised that kind of cash, Hirobe didn't want a spanking-new temple.

So, chasing his dream over the next five years, Hirobe worked on the restoration almost single-handedly. He cut down the bamboo in the garden, made a parking lot, laid an approach path, repaired the roof and reinforced its tiles. 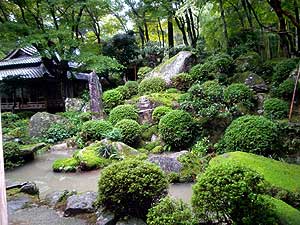 Now, the temple looks as if it has stood proud and sound in this virtually hidden village since ancient times.

Hirobe, wearing kesa (the kimono of a Buddhist priest), explained to me the composition of the garden, proudly pointing to one rock after another.

"The garden was said to have been designed in the early Edo Period (1603-1867) by the renowned tea master Kobori Enshu," he said. "These are tsuru jima (crane rocks) and kame jima (turtle rocks). And that huge stone, which Shirasu thought was part of an ancient tomb, is considered today to have been an iwasaka, a kind of megalith that ancient people worshipped. Such stones are often incorporated into Buddhist temple structures."

Visitors can now sit quietly in the repaired shoin (guest room). There is no tokonoma (small raised alcove) with decorative scrolls and flowers, which is normally provided in a Japanese tatami guest room. But there is a small window looking over the garden that, when viewed in a certain way, presents the best picture of the beautiful garden's bamboo, trees, rocks and pond.

Time there goes slowly — and so peacefully.

To add to the ambience, Hirobe's friends have set up lamps that are used to illuminate the garden twice a year: in November for the red maple leaves, and in May for the fresh greenery.

Kyorinbo is the only remaining branch temple of the main Kannonshoji Temple, which is the 32nd point of the Kansai Kannon Pilgrimage.

But Kannonshoji Temple, which used to lead more than 30 such small branch temples, has experienced its own difficult reconstruction period. A fire broke out in 1993, which burned down the whole temple, including the main statue of Buddhist deity Kannon Bosatsu. After recovering from the shock — losing everything the temple had preserved for centuries — its guardians decided to create another statue made of fragrant sandalwood, which is considered a sacred tree. The wood was imported from India, the birthplace of Buddhism; they had to gain special permission from the Indian government, as the wood is protected and exports are limited, but that's another story.

The current chief priest, Zuio Okamura, aged 41, succeeded his father in 2008. Okamura has been supporting the reconstruction of the temple, and it was he who went to India, on behalf of his father, to secure permission for the sandalwood.

In his book "Chichi no Oshie" ("My Father's Teachings"), Okamura writes how he has learned from his father — through his childhood, then as a young monk until he succeeded the position of chief priest — to overcome the difficulties the temple faced.

He smiles next to a dynamic statue of Nio, a muscular guardian of Buddha. Such statues would normally be positioned at the entrance gate, but Kannonshoji Temple's gate was burned down centuries ago. Its reconstruction is on Okamura's to-do list.

Temples are not precious simply because they are old. Each one has its own history of a struggle for survival waged by sincere and enthusiastic people. And now, if you wander around hidden villages in ancient Omi Province, you are sure to come across a secret temple from long ago.

Kyorinbo Temple opens 9:30 a.m.-4:30 p.m. on weekends, holidays, Jan. 1-3 and during Golden Week in late April and early May; open every day from Oct. 1-Dec. 15; other days by appointment only for group tour. Entrance is ¥500. Take the Tokaido Shinkansen to Maibara Station, and change to the Biwako Line to Azuchi Station. The temple is a 50-min. walk or 10-min. taxi ride from Azuchi Station. For more information, call the temple on (0748) 46-5400. Kannonshoji Temple is always open. Admission is free. The temple is a 10-min. taxi ride from Azuchi Station to Omotesando Noboriguchi (entrance for the main route to the temple) and then a 50-min. walk to the top of Kinugasayama mountain (also accessible by car up to halfway to the peak, except in the winter season). For more information, call the temple on (0748) 46-2549.