Kyoto, Japan -- A Buddhist temple in Kyoto is displaying its historic sculptures in 3D on iPads in a bid to provide 21st century appreciation of the artefacts. 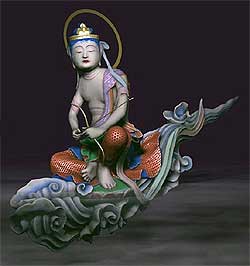 A Buddhist temple in Kyoto is displaying its historic sculptures in 3D on iPads in a bid to provide 21st century appreciation of the artefacts.

The project has been launched at Byodoin, one of the nation's oldest temples dating back nearly 1,000 years and a designated UNESCO World Heritage Site.

Five iPads have been installed alongside a series of historic Buddhist sculptures in the temple, located in the Kyoto region, displaying images of the artworks in three-dimensional form.

The artworks form part of a collection of 52 wooden sculptures titled Bosatsu on Clouds, which were created in 1053 and have been declared National Treasures by the Japanese government.

A laser scanner was used to capture the images of five of the ancient artworks from the front, back and sides, in order to enable visitors to appreciate the intricacy of the craftsmanship from all angles.

The end result, depicted on the iPad tablets, shows the now faded ancient wooden sculptures in all their original 11th century glory, rich in colour and unflawed in form. However, the figures are displayed at a high level and difficult for visitors to view well.

Monsho Kamii, a priest at Byodoin, said: "I wanted people to be able to feel the aesthetic values that date back a thousand years by using computer graphics to recreate how these sculptures originally looked."

The sculptures are believed to have been originally created by Jocho, the acclaimed 11th century artist and master of religious statues who is widely credited with redefining Buddhist artistry in Japan.

The 52 Bosatsu on Clouds, each measuring around 25 ins in height, appear to hover in the air surrounding a larger central sculpture of Amida Buddha sitting on a lotus at Byodoin Temple.

The presence of iPads in a historic old temple is perhaps a side effect of Japan's status as a nation famed both for its hi-tech modernity and its rich cultural heritage.