Another Kirti Monk Jailed for 3-Years Term, Many Still Detained

Dharamshala, India -- Another Buddhist monk of Kirti monastery of Ngaba County, eastern Tibet was sentenced recently to three years imprisonment by a Chinese Immediate people's court in Ngaba for carrying out protest against Chinese rule in Tibet and its severe repression of the peaceful Tibetan people. Several others are still being held without charge after detained for nearly six months. 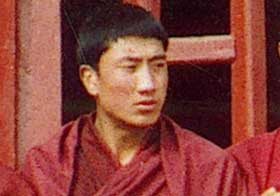 Unlike those of other countries, hundreds of Tibetans have been severely tortured and imprisoned for freely exercising their rights to freedom of expression and opinion. "Paljor sentenced to three years in jail, has being sent to a Chinese remote prison camp called "Meyang" Detention Center in Chinese Sichuan Province," according to a latest report received by The Tibet Post International (TPI).

Torture is an everyday reality in Tibet, is used by Chinese authorities as a tool against Tibetan people particularly writers, intellectuals and Buddhist scholars, creating a climate of fear. "Several others in Ngaba county who were detained by the Chinese authorities recent months were said to be being brutally tortured, they are still being held without charge," Kanyak Tsering of India based Kirti Monastery told TPI, Wednesday, 7th September.

Paljor, 38-year old monk from Kirti was arrested around 20th March, a few days after 20-year old Buddhist monk Phuntsok's self-immolation that has sparked a widespread protest against Chinese repression in Ngaba county of Tibet.

Kirti Monastery based in Dharamshala, expressed its deepest fear that the detainees from the from the Kirti Monastery in Tibet are dealing with torture and extreme inhumane treatment in the Chinese detention centers. "Tsekho, 30, Dorjee, 16, Lobsang Jigme, 30, Gephel 23, Lobsang Dhargye, 22, Gerig, 60, and Kelsang 41 from Ngaba county of Amdho region are still being detained six months after their arrests.

Some 300 monks from the monastery have been detained, and were taken away into custody by armed Chinese security forces to an unknown location during the night of 21 April this year. There is still no detailed information about the most of the detainees held in and the area continues to remain off-limits to foreign journalists.

Today, hundreds of Tibetans are in prison for peacefully speaking or demonstrating in support of the Tibetans' right to self-determination or in support of the Nobel Peace prize winner, His Holiness the Dalai Lama. Despite international condemnation, China openly continues to deny their freedom to express.