With burnings, Buddhist monks sacrifice themselves for freedom

HONGYUAN, China -- The young man's hands began to shake, and he tugged at his fingers to keep them still. The 20-year-old ethnic Tibetan was terrified of the police finding out that he'd spoken about the Buddhist monks who've been burning themselves alive. 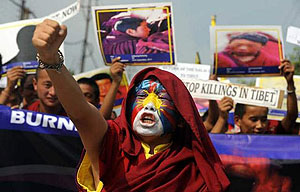 "They're doing it because they want freedom," said the livestock trader, who asked that his name not be used.

He paused before adding, "Because we want freedom."

Since March, according to rights groups, 11 Tibetan Buddhist clergy have set themselves on fire in China's western Sichuan province. Almost all have been in or around the town of Aba, 50 miles as the crow flies to the west of Hongyuan, amid mountain ranges at the edge of the Tibetan plateau where yaks graze and prayer flags inscribed with mantras and blessings flap in the wind.

It's said that at least five have died in the fiery exclamations of Tibetan complaint about restrictions on their culture and religion and the continued exile of their spiritual leader, the Dalai Lama.

The chain of self-immolations -- which includes six monks, three former monks and a nun -- is unprecedented in modern Tibetan history. The most recent was Thursday.

A Buddhist nun, Palden Choetso, shouted, "Long live the Dalai Lama!" and "Let the Dalai Lama return to Tibet!" according to a report relayed to the London-based rights group Free Tibet.

The response by the Chinese Communist Party has been to knuckle down even more. Towns surrounding Aba are stacked with police. Internet access is shut off in many spots. Those suspected of sympathizing closely with activist monks are said to have disappeared.

A reporter was detained for two hours Oct. 29 after he was pulled over at a police checkpoint 15 miles from Hongyuan on the winding road toward Aba. He was released only after photos from his camera were deleted, and he agreed not to stop again in Hongyuan, a condition emphasized by threats to his driver and the multiple vehicles that followed him.

The crackdown didn't stop monks from spreading their complaints via pamphlets in the area, nor did it put an end to people soaking themselves with gasoline and lighting matches; six self-immolations took place in October alone.

Many Tibetans say that the country's Han Chinese majority, with the muscle of the Communist Party behind it, essentially is occupying their lands and moving to monopolize business interests while marginalizing the Tibetan language and way of life.
'We are all afraid'

The Chinese government maintains that it liberated Tibetans from a feudal existence and now works to improve their lives with billions of dollars in infrastructure projects. Any outbursts of Tibetan rage, the government maintains, are the result of outside influences personified by the Dalai Lama.

In Hongyuan, police now swarm the streets. Many of those patrolling the predominantly ethnic Tibetan town appear to be Han Chinese.

"A lot of people have been taken away by the government," said the livestock trader, who wore a puffy neon-blue jacket and jeans.

"A lot of Tibetans feel that we aren't free. We aren't allowed to put up pictures of the Dalai Lama. Do you understand what I'm saying?"

He was joined by a group of friends, a couple of whom wore small likenesses of the Dalai Lama at the ends of thin leather necklaces that they tucked beneath their shirts.

One of them, another Tibetan trader in his early 20s, spoke up, "We are all afraid of the government."