The merry monk of Hangzhou

Hangzhou, China -- The 18 life-size murals encircling the Ji Gong Hall of Lingyin Temple in Hangzhou make a pictorial narration of the life of the legendary monk Ji Gong. Provided to China Daily 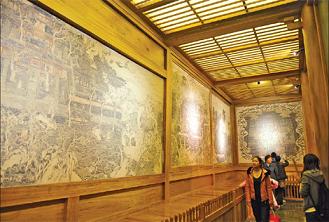 Murals depicting the life story of a somewhat eccentric but immensely-adorable ascetic who lived in the Southern Song Dynasty now adorn the walls of the famed Lingyin Temple. Wu Yong reports.

Delicately painted on the walls of Ji Gong Hall in the temple, the 18-meter-high and 50-meter-long murals display 18 stories about Ji, a Robin Hood-like living Buddha, anecdotes about whom can be heard in every corner of the city.

Unlike the heavy paint and thick colors in Western frescoes, the Ji murals are more like a Chinese water-and-ink painting.

The murals are not painted directly on the wall, but on palettes that hang on them. The background features a yellow earth color and the drawings are mainly in black and white with some red shadows.

The quiet colors and the vague scent of mud, combining with mineral pigments, convey a sense of peace and tranquility.

Together, the 18 murals encircling the hall make a pictorial narration of monk Ji's life story.

The first mural shows Li Maochun, Ji's father, praying for a child. His wish was realized - a gift for his philanthropic acts.

When Ji, whose name was Li Xiuyuan before converting to Buddhism, was born, the statue of an arhat fell to the ground - widely believed to be a sign that Ji was an incarnation of Taming Dragon Arhat, one of the 18 legendary Buddhist arhats.

At a young age, Ji was fond of researching Buddhist scripture. At 18, he became a monk at Lingyin Temple against the wishes of his family, starting his life as a legendary living Buddha.

Rebelling against traditional Buddhist customs, Ji loved drinking and eating meat. All his life he roamed the streets of Hangzhou, punishing bullies and helping the unprivileged with his magic powers.

The merry monk of Hangzhou

The murals on the wall depict mythical stories from his life. Ji had predicted that a hill would fly and settle down in front of the Lingyin Temple premises, but people thought it was a fantasy of the "mad monk".

On the day the peak was expected to fly in, a wedding was due to take place on the very same spot. Ji kidnapped the bride, which made the villagers chase after him, thus vacating the spot and eventually helped them avoid the disaster. This is the mythical story behind the origin of the Peak Flying-from-Afar.

A fire destroyed the main hall of the Jingci Temple, even as Ji slept in the premises. The abbot urged him to acquire large pieces of wood to restore the hall, but he slept through the crisis for three days, induced by a drunken stupor.

Shaken back to consciousness, Ji shouted: "The wood is here, take it from the well!" Large pieces of wood kept falling off the temple well until there was enough to rebuild the hall. The Shenmu Well, or "Legend Wood Well", located in Jingci Temple, is associated with this mythology.

The last mural is about Ji's parinirvana and return to Heaven as the Taming Dragon Arhat.

It took Lin Haizhong, a professor at the China Academy of Art, and his students more than two years to restore the work.

"While there are manuscripts to provide clues to the restoration of most traditional Chinese murals, in this case we are creating completely new murals," Lin said.

According to historical records, a prototype of Ji lived in the Southern Song Dynasty (1127-1279), when Hangzhou was the capital city. They restored the city's landscape to the way it looked 800 years ago, in deference to Ji's life and work.

The Southern Song Dynasty was one of the most prosperous and advanced economies in ancient times, due to vigorous trade along the Grand Canal.

The emperors steadfastly believed in Buddhism and Taoism, leading to the construction of numerous temples along the Qiantang River and West Lake of the city.

Over time, the magnificent palaces, exquisite buildings and solemn temples were mostly destroyed in blasts during wars. Genuine Song Dynasty constructions have left no traces at all along the West Lake.

Lin and his students devoted much of their time researching the panorama of the city and urban life at that time.

They have closely studied the features of a large number of round silk fans, preserved in the Palace Museum and those in Shanghai and Shenyang.

In August 2010, a group of restorers spent half a month traveling to Japan to study ancient architecture in Kyoto and Nara, where buildings from the Tang (AD 618-907) and Song (960-1279) dynasties are well-preserved.

A close observation reveals that Hangzhou's scenic spots such as the Lingyin Temple, Liuhe Tower, Leifeng Tower and even the West Lake figure in the murals, although they look slightly different from their current images.

Many people picture Ji wearing a broken monk's cap and torn cassock, holding a broken fan. Some of his behavior was considered eccentric and even mad, but he spoke with humor and was kind-hearted. Most of all, he was deeply loved by the common people.

To draw a vivid image of the monk, Lin and his students went through various versions of Ji's stories and the resources in Lingyin Temple. Finally they decided to depict him as a ragged, jocular and kind monk, in keeping with the mythology about him.

The humid climate poses a threat to the murals. Lin said that in the next decade the murals will have to be watched closely to arrest the paint from chipping off and necessary repairs will be made.